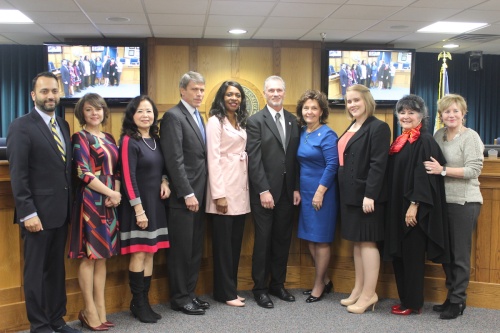 The Austin Community College board of trustees on Monday considered a policy change that would effectively reduce out-of-district fees by $77 a credit hour.

The proposal, which would change the community college system's out-of-district—meaning students who don't live in the blue area shown on the ACC district map—fees to three times the in-district fee, would cut about $4.5 million from the budget, according to Neil Vickers, executive vice president of finance and administration.

It would also make for a simpler policy, Vickers said.

The current policy is based on the ratio of annual property tax revenues to annual in-district credit hours. That means as property taxes go up, so do out-of-district fees.

Fall 2016 out-of-district fees for a student taking 12 semester credit hours—the minimum amount needed to be considered a full-time student—is $3,552, which doesn't include the $804 tuition.

The Texas college with the next highest out-of-district fee for a full-time student is Tyler Junior College, which charges $1,378.

If the ACC board of trustees votes to make this policy change, they must decide whether to phase the $4.5 million cuts in over time—perhaps three years, Vickers said—or cut the budget at one time.

He said while he's not a fan of spanning the cuts over several years, trustees could see the data on the impacts of the cuts each year if the phasing would be applied.

Trustees will vote on this policy change at their April 3 meeting.

Fiscal Year 2018 budget discussions are underway at ACC, with the board expected to receive its first briefing in the revenue portion of the budget in April.

The board is expected to adopt its tuition rates in May and the budget in July.