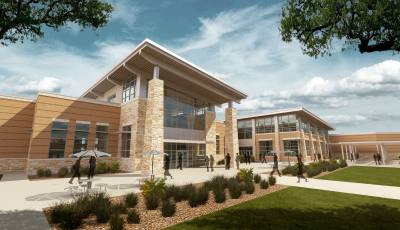 Pflugerville's fourth high school is one of the new schools Superintendent Alex Torrez saw built during his tenure at PfISD.

Pflugerville ISD Superintendent Alex Torrez said he will finish his contract year and then resign from the district. The announcement came in a news release from the district late Wednesday afternoon.

“This is a good time to make a change, not only for me, but also for the district, which can begin preparation for new leadership,” said Torrez, whose contract runs through September 2017. “I look forward to collaborating with the board to ensure a smooth transition of leadership over the next several months.”

In announcing his resignation, Torrez thanked a number of groups for their support and contributions to the successes of PfISD.

“PfISD has an array of extremely talented teachers that are squarely focused on student success and moving our plan forward,” Torrez said in the release. “Likewise our staff is second-to-none, working hard to support our mission and do what’s right for students.”

In 2013, Torrez said, many of the systems that are now in place were then in need of development, including an updated curriculum, a facilities master plan and a more structured compensation plan.

“We’ve addressed all of those and, in the process, have set PfISD on a great course,” he said. “One of the statistics of which I’m most proud is that, in a recent survey, 97 percent of PfISD employees said tat their work is aligned with the campus vision. That speaks loud and clear to the work that’s taken place over the past several years.”

The release said Torrez is eligible to retire, but he has not ruled out other superintendent opportunities or perhaps teaching at the university level.

“I’m fortunate to have time to assess what is the next best step for me and my family,” Torrez said.

The announcement comes as a series of community meetings are being held to discuss boundary changes to populate the new Mott Elementary School and Weiss High School in the district next fall.

The PfISD board of trustees will discuss the timeline and process of replacing Torrez at upcoming meetings. The next is 7 p.m. Dec. 15 at the PfISD Administration Building, 1401 W. Pecan St., Pflugerville.
SHARE THIS STORY