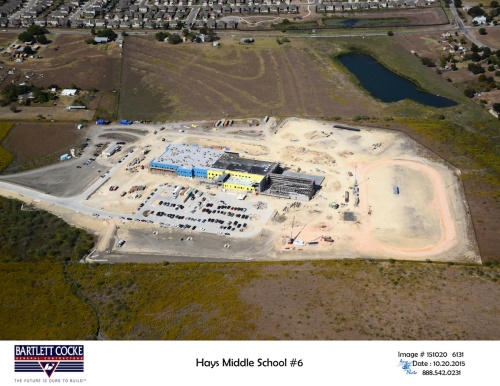 An aerial photograph of Hays CISDs Dr. T.C. McCormick Jr. Middle School shows the construction site on Oct. 20. The middle school is expected to open for the 2015-16 school year.

New attendance zone boundaries have been drawn for Hays CISD middle and elementary schools as the district gets set to open its sixth middle school in the 2016-17 school year.

The HCISD board of trustees voted 6-1 on Dec. 14 to approve the new map, which affects all middle school zones and seven of the district’s 13 elementary schools. Trustee Teresa Tobias voted against the measure.

“This is one of the hardest things a school district can do because it sure does affect the lives of real people, parents and families,” HCISD spokesperson Tim Savoy said. “It causes change.”

Fiona Spalding-O’Neal, secretary for the committee, said the process was not easy.

“We really looked at everything that came through including the concerns about changing the demographics of schools. To all of us, that was a really important item to look at. We did, and … we were able to see that we really didn’t dramatically change the schools.”

The committee also weighed communities that have yet to be built in the district and listened to each concern that was expressed through written or stated testimony, Spalding-O’Neal said.

“You want everybody to be happy,” she said. “You want the kids to stay together while they’re developing a rapport. We couldn’t stop some of that change, unfortunately.”

Members of the district’s sixth-grade class this year will be exempt from the changes.

“The numbers are such that the committee … [was] able to make that happen,” Superintendent Michael McKie said, adding that the district may not be able to offer that in future processes.

A summary of the changes can be found on the committee webpage.