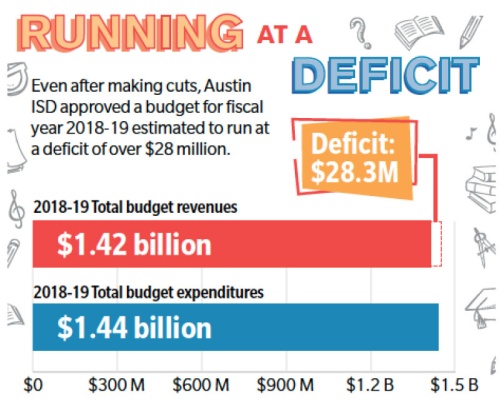 Austin ISD is facing a significant budget shortfall. According to a report prepared for the district by Templeton Demographics in fall 2018, the district has lost over 6,000 students over the last five years and its enrollment is projected to drop by approximately 7,000 additional students over the next decade.  Fewer students means fewer dollars flowing into the district because AISD can only keep a certain amount of property tax revenue it raises locally. AISD collected $1.3 billion in tax revenues in the 2018-19 fiscal year, but kept only $774.5 million because the state sets a formula dictating how much money each school district should need to educate its students.

The rest of the property taxes raised in Austin are sent out to communities around the state in a process coined recapture or “Robin Hood.” In FY 2018-19, AISD sent $669.6 million out in recapture payments. If no legislative changes are made, that number is expected to balloon to $901.4 million in FY2020-21, the most it has ever sent.

Without any added revenue or cost-cutting measures, AISD Chief of Business and Operations Nicole Conley Johnson said AISD would be facing a $65 million budget deficit for the upcoming fiscal year—although that number would be lower if state lawmakers pass school finance reform during the ongoing legislative session.

For years, AISD’s leadership has looked for ways to mitigate the effects stemming from fewer students—and as a result less money—coming into the district and more funds from local taxes going out. This winter, both the district’s staff and a task force made up of citizens presented a range of options to the board that included one proposed action the district had not yet utilized as a method to closing the budget gap— closing or consolidating schools.

“It’s the estimation of this trustee that schools must close,” District 2 trustee Jayme Mathias said in a Feb. 26 board meeting.


CASH FROM THE CAPITOL?

When the state’s 86th legislative session began in January, many state lawmakers vowed to repair the school finance system in Texas. At a press conference in the Texas Capitol on March 5, members of the Texas House of Representatives laid out House Bill 3, a $9 billion plan to put more state money into school finance, cut property taxes and increase teacher pay.

The legislative proposal would increase the basic allotment the state sets as the amount necessary to educate each student from $4,765 to $6,030, meaning districts such as AISD would be able to keep more local property taxes and send out less money to recapture.

Conley Johnson said if the proposal becomes law, the dollars that flow into AISD will be able to both sustain programs proven effective and provide salary increases for teachers and staff.

“It substantially puts us on a better path toward solving some of our financial issues and closing our budget gap,” she said.

Even if there is an injection of funds into AISD from the Capitol that could solve some of the district’s budget challenges, Conley Johnson said that does not mean school consolidations would be off the table because the district is working to put its students in the best possible learning environments while being mindful of using taxpayer funds efficiently.

“We would make those decisions, presumably, even if there wasn’t the financial pressure, because there are better things we could do with our money to support our kids more,” she said.

As the district has discussions about closing and repurposing school campuses, it is also developing plans to modernize or construct 17 new facilities as part of the $1.1 billion bond package voters approved in November 2017.

Construction has started on some of those campuses, including Govalle Elementary School in East Austin and Doss Elementary School in the Northwest Hills neighborhood. With consolidations, construction and modernization happening simultaneously, AISD Superintendent Paul Cruz said there is an opportunity to cut down on overhead costs, put more students in modern learning spaces, improve programming and fill community needs like affordable housing.

“It’s not about closing. It’s not about consolidation. Could that be an effect of what we’re trying to do? Yes, but the intent is looking at this information collectively. We want to be better and stronger than we are today,” Cruz said.

District staff and the budget stabilization task force, a group of citizens formed by the district over the summer to evaluate options, have both proposed budget solutions that include closing schools. The district’s plan calls for up to 12 school closures, and according to Robert Thomas of the task force, closures would save AISD $800,000 to $1.2 million per campus.

While the goal of the closures will be to better utilize campuses, the task force’s report delivered in January said possible closures “cannot occur exclusively” at under-enrolled campuses and suggested school consolidations should occur alongside redistricting.

Those suggestions in the report speak to some of the challenges AISD will face in the consolidation process. Half of the district’s schools serving East Austin students are under-enrolled, and in that area of the district 80 percent of students are economically disadvantaged.

There is also history tied up in consolidations tied to events in those communities decades ago. In 1971, three schools serving black students, L.C. Anderson High School, Kealing Middle School and St. John’s Elementary School in East Austin, were closed after a federal court ordered Austin to desegregate, according to the Austin History Center.

Barbara Scott, the president of the Colony Park Neighborhood Association in East Austin, attended an open house session March 6 at LBJ Early College High School to provide her feedback on the district’s 2019 Facility Master Plan, a document that will lay out AISD’s vision in the areas of athletics, fine arts, and career and technical education.

“When you close a school you hurt the community, because communities are built around schools,” Scott said.

Vincent Tovar, a member of the PTA and campus advisory council at Govalle Elementary School and a parent at both Govalle and Fulmore Middle School, said the community should make itself heard during the consolidation process–and the district has a responsibility to listen.

“In that sense you’re getting the community to take responsibility for its nearby school and hopefully encouraging parents to send their kids there,” Tovar said.

By involving the community in the process, ensuring equity and listening, AISD District 9 trustee Arati Singh said consolidation can be a positive thing for residents if communities know the changes will ultimately help families in the end.

“We put so much thought into it, and we have such a huge opportunity to make this a positive thing for our communities,” Singh said.