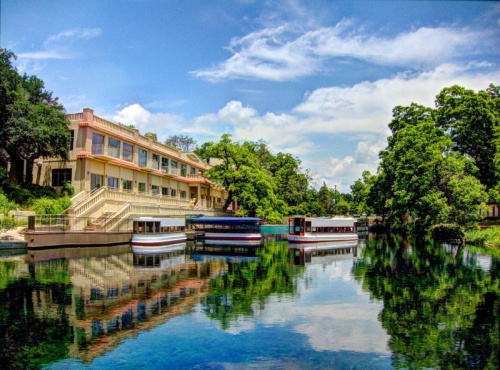 The Meadows Center for Water and the Environment sits on Spring Lake, which is fed by San Marcos Springs and forms the headwaters of the San Marcos River.

Every two years, as a condition of the federal Clean Water Act, the Texas Commission on Environmental Quality releases a report on water quality across the state and names a number of bodies of water as impaired, meaning that the level of pollution is higher than regulations allow.

In 2010, for the first time, the San Marcos River made that list. Based on one of the many monitoring stations TCEQ has along the waterway—in this case the one right at I-35—the regulatory agency determined that the water sampled had too many total dissolved solids, one measure of water pollution.

“It got the community thinking that it was really time to be proactive about protecting the river from all of the issues that were coming,” said Jenna Walker, program coordinator at The Meadows Center for Water and the Environment, which is part of Texas State University.

The level of contaminants was relatively low, and the river is no longer considered impaired, but the TCEQ listing started a process that culminated in October with the official acceptance of the Upper San Marcos Watershed Protection Plan by the U.S. Environmental Protection Agency.

Creating a watershed protection plan is a formal process established by the EPA as part of the Clean Water Act, and it often happens once a waterway is significantly polluted, which is not currently the case for the San Marcos River. But the entire watershed is vulnerable to the inevitable future development of Hays County and San Marcos.

“Our streams are becoming increasingly urbanized,” said Melani Howard, habitat conservation plan manager for the city of San Marcos. “When you have urbanization around a river, your runoff changes from natural land surface to impervious cover.”

The regulatory agencies also recognized the risk to the waterway in a rapidly developing area.

“TCEQ agreed there were plenty of reasons to go forward,” said Paul Murray, co-chairman of the project’s stakeholder committee, which played a key role in writing the plan. “After the air we breathe, the water we drink is the most precious thing to us.”

Dozens of people and organizations worked on the plan, including representatives from the city of San Marcos, Hays County, the San Marcos River Foundation, the San Marcos Greenbelt Alliance, the Guadalupe-Blanco River Authority and the U.S. Geological Survey.

“It was a goal from the very beginning to include as many stakeholders as possible,” Murray said.

During the process of developing the plan, The Meadows Center coordinated efforts to involve community members, extensively studied the watershed and developed best management practices, or BMPs.

BMPs are measures that stakeholders can take to improve and prevent the degradation of water quality. The plan includes a wide range of projects, some that can begin immediately, such as pet waste stations and rain gardens, and some that may take more time, such as retrofitting parking lots with permeable pavement or implementing further land-conservation measures.

Most BMPs focus on problems created by the increase in impermeable land cover that is part of urbanization. Impermeable surfaces mean that when it rains, more water goes directly into the river at greater speeds and picks up pollutants that were already on the ground.

“If we can get the water to filter into the ground as quickly as possible, we’ve solved our problem,” Howard said.

Because it is spring-fed, the San Marcos River is cleaner than most rivers, but that makes it uniquely vulnerable to contaminants.

“If we continue to increase those types of pollutants in a place like the San Marcos [River], we just won’t have that clear water anymore,” Walker said. “It will still be running but it won’t be that unique Hill Country stream anymore.”

Acceptance by the EPA came with $179,713 for implementation, but it also means that other grants may be available. Still, Walker said in the end it has been a community-driven process and will remain one.

“The ultimate goal is for the people and partners invested in the community to carry it forward,” Walker said.