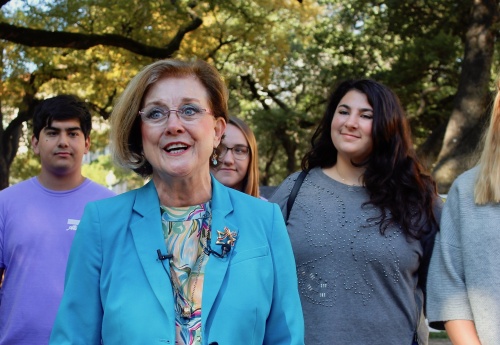 Travis County Clerk Dana DeBeauvoir speaks to a group of University of Texas students during early voting for the 2018 midterm election.

After 12 days of early voting and 12 additional hours of voting on Election Day, 483,050 Travis County residents— 61.3 percent of the county's registered voters—cast a ballot in the 2018 midterm election, according to the Travis County Clerk's Office.

Four days into early voting, Travis County Clerk Dana DeBeauvoir said the county could be on pace for a presidential-level turnout.

"This is an exciting number," she said, referring to the average of 3,000 votes cast per hour countywide in the first several days of early voting. "This is what we usually see for a presidential election."

While the percentage of votes cast in this midterm did not surpass the turnout for the 2016 presidential election, it did exceed the 2014 midterm. All results and totals are unofficial until canvased.

As the county population has grown over the past 4 years, so too has the number of registered voters.

More than three out of four ballots cast in this election took place during the early voting period.