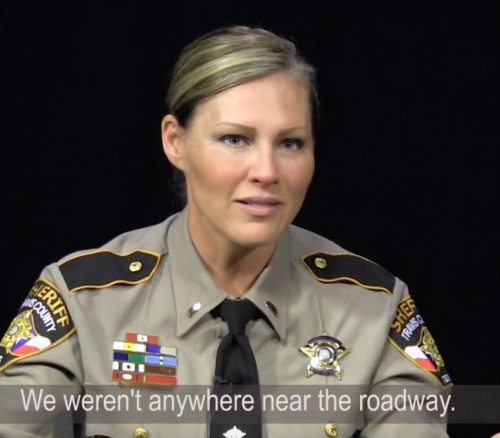 TCSO Dep. Belinda Mangum featured in an anti-DWI video shares a story of how a suspected drunken driver struck and killed another motorist she had earlier pulled over.

For the first time, area law enforcement teams will target speeding and drunken drivers based on areas of past serious injury or fatal crashes, a Travis County sheriff’s sergeant said.

“It is a big change in the way in the way law enforcement pushes out their traffic divisions, moving to major arteries where major collisions are occurring and move that trend in the other direction,” Sgt. Don Rois said.

In previous years, local, county and state law enforcement agencies would assume general patrols over the holiday season, augmented by anti-DWI teams. In Travis County that includes deputies who will work extra shifts thanks to a grant from the Texas Department of Transportation.

This year’s grant for the Impaired Driving Mobilization program covers 112 overtime hours for DWI patrol deputies between the Dec. 15-31 period, according to Rios who used to head the county sheriff’s traffic enforcement division.

Law enforcement agencies would not reveal exact locations of the hot zone patrols—concerned drivers may try to avoid them—but Rios indicated they would take in sections of I-35 and other high-speed corridors. A large majority of DWI crashes occur between 6 p.m. and 4 a.m., with the two highest days being Saturday and Sunday, data from the Texas Department of Transportation shows.

The anti-drunken driving enforcement program is augmented this year by new videos from the Travis County Sheriff’s Office featuring personal stories from deputies who have had close calls with drunken drivers.

In one, a lieutenant named Belinda Mangum describes a deadly incident in 2006 with a driver who struck her patrol vehicle as she was completing a DWI traffic stop with another motorist in southeast Travis County. The motorist was struck as he was getting back into his truck, thrown 150 feet and killed.

“This affects all of us. This affects me. I’ll never be the same after that night,” the lieutenant says in the video. “But I’m going to use [the memory of] that night to save someone else’s life and to make it safe for everyone.”

By the numbers: drunken drivers in court

The campaigns come at a time when drunken driving cases show little sign of diminishing, according to records from the Travis County District Attorney’s office, obtained through a public information request.

The number of total drunk driving cases presented to the county and district attorney’s offices show some sign of slowing down. Excluding 2017, 1,864 separate cases came before the county courts.

One new tool for offenders to have their record cleared is a pretrial diversion pilot program aimed at first-time DWI defendants.

“It’s an onerous [12-month] program,” said Hamre, who added alleged offenders must voluntarily participate, have had less than 0.15 percent blood alcohol concentration and when arrested not have been involved in a collision.

Professionals in law enforcement and the courts both say the other part of the recipe to limit drunken driving collisions involves keeping impaired individuals from ever getting on the road in the first place.

“Some people are going to [drink then drive] regardless,” Lakeway Municipal Court Judge Kevin R. Madison said. “I think [the solution] is really a community effort. It’s going to take more peer pressure than the fear of getting arrested.”

Madison, who also worked as an EMT and firefighter for 12 years in West Lake Hills and Dripping Springs, recommended people hosting parties say to an inebriated guest: “You’ve had a couple drinks; let’s call a cab or an Uber or Lyft.”