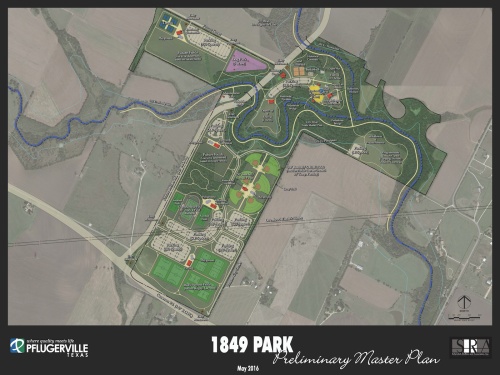 The city of Pflugerville is working on a master plan for its new park and sports complex.

Soon to become the focal point of recreation opportunities in Pflugerville, the 1849 Park is full speed ahead with construction on the north side of Cameron Road two miles east of SH 130 and East Pecan Street. The first phase, funded by a 2014 parks and recreation bond, is under construction, with turf placed on football and multipurpose fields. Subsequent phases will be discussed and developed as the project moves forward.

“There will be so many folks out there enjoying this park when it’s open,” Pflugerville Parks Director James Hemenes said. “The excitement for this park continues to build.”

Phase IA addressed utility infrastructure, water, storm sewer, irrigation and electricity needs for the 320 acres of city-owned land. Part of that land on the nortwest side of the park was donated by the developers of the Carmel development, which will include more than 2,300 residential lots. Their donation of more than 80 acres satisfies the development’s code mandate for park land.

Phase I of the 1849 Park includes three football fields, three multipurpose fields, restrooms and parking, which have been under construction since November. The cost of the initial phase is $10 million, which is part of the $62 million overall plan for the park. Twenty-two acres of natural sports turf has been installed and is taking root on the fields. Eventually, to help build out the northern part of the park, Melber Lane will be extended, first as a two-lane road and eventually as a four-lane road as traffic and development increases.

Hemenes, Assistant City Manager Tom Word and the city of Pflugerville’s consultant, Henry Parker of Schrickel Rollins and Associates, met residents at informational meetings in 2016 about the park.

Parker said while the first phase includes football and multipurpose fields, future development will include playgrounds, baseball and softball fields, tennis courts, an archery area, a learning area, a splash pad, pavilions, parking for food trucks, a 5-acre dog park and more than 10 miles of cement and natural trails, which can be connected to other trails as the east side of Pflugerville develops.

“We are developing it for the benefit of all of our citizens,” Word said at an informational meeting in 2016. “There will be many phases over many years.”

The south section of the park near Cameron Road contains the football and multipurpose fields. Hemenes said the city has only one public tennis court at this time. The schools have several others.

“The first phase addresses the needs of youth sports, but we have other needs, especially for other age groups, Hemenes said. Our senior population is the fastest growing, but having something for all ages is what we are doing with this park.”

Hemenes said plans for the park have altered only slightly from the original look and are still full speed ahead.

With a climbing population nearing 60,000 residents and a total anticipated to reach 250,000, Pflugerville officials said recreation continues to be a priority in the city.

Pflugerville Special Events Coordinator Maggie Holman, employed by the city for two months, said the city’s special events, including the Pfirecracker Pfestival, Music in the Park and Deutschen Pfest will be perfect events for the city’s newest park.

The park “is our brand and identity in Pflugerville,” Holman said. “It’s a visual representation of what we are and represents a beautiful part of the state we live in. I’m really impressed how supportive the community is when it comes to recreation.”

The number of participants is climbing quickly, Hemenes said.

Two new events in 2017, Pfloating Movie Nights and Pfurry Splash Party, had 400 and 190 attendees, respectively. The splash party had 65 canines and 125 people in attendance.

“We understand our residents want recreation opportunities,” Hemenes said. “From our youth leagues to our senior citizens—which is the fastest growing population here—our population is very diverse with a diverse demand for leisure activities. This park will have something for everyone.”

“A city’s aesthetics and green space matter to companies hoping to draw or retain a strong, creative workforce,” Madison said. “Workforce is the first thing that most companies focus on in site selection. Having an open space like 1849 Park that is founded in history and home to community activities and sports is a strong foundation for economic development recruitment efforts and proves an opportunity for tourism that will definitely impact our local economy.”

Hemenes agrees and said the other departments within the city of Pflugerville are supportive of the parks and recreation goals.

“We work well as a team,” Hemenes said. “It will pay off as executives and company owners look at us. They care about quality of life and Pflugerville is a great place to live.

“Our parks are an investment in our community and will help economic development. They really go hand in hand. Great communities invest in police, schools, infrastructure, parks and a recreation system. We are doing that.”


Being a Good Neighbor

Hemenes has talked to the City Council about changes to the park to make it a better neighbor. While only a few houses surround the park, that part of Pflugerville is poised for the city’s greatest growth in housing and other development in the next decade.

“It’s important to be a good neighbor and do things the right way,” Hemenes said. “We have to be conscious of our neighbors.”

Hemenes recently asked the council for different lighting, approved and soon to be installed, that will be more efficient and not allow the light to spill onto neighboring properties.

“We also have a buffer between property lines,” he said. “We want this to be something all residents enjoy, along with the neighbors.”

While the park fields will be used for practices, games and tournaments, Hemenes said it is important for grass on sports fields to get rest.

“We won’t be playing on the fields all day and all night,” Hemenes said. “Grass grows by the inch and dies by the foot, so we have to rest the turf. The standard is using them about 25 hours per week.

“Anything more is too much. We want something that will last and be the highest quality. It’s what a thriving community like Pflugerville expects.

Part of the old Pfluger House on the northern part of property will repurposed.

“We want to preserve the history, but the house will not be used in its current state,” Hemenes said. “We may use part of it, maybe replicate a room, but we will honor the family and our history of being a farming community in the 1800s. With this park and with recreation in Pflugerville, I think it’s best to say ‘stay tuned.’ There is a lot to come.”
SHARE THIS STORY