Why is Austin's near record-low unemployment a concern to some economists and officials? 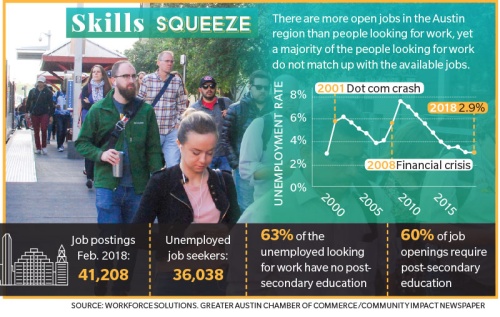 The Austin-Round Rock area’s unemployment rate has dropped to a near record-low, and according to the U.S. Bureau of Labor Statistics, last year it created jobs faster than all but one of America’s major metropolitan areas.

According to numbers from the Greater Austin Chamber of Commerce, if everyone looking for work in the region found employment, there would still be more than 5,000 job openings.

Although many agree more jobs are better than no jobs, city leaders, labor experts and economists say the numbers show a mismatch between the skills desired by employers and the skills held by those in the region looking for work.

"It’s a serious concern,” Austin economist Angelos Angelou said. “We are creating a lot of jobs, but those job candidates are coming from [outside of the Austin area].”

Officials blame the area’s rapid in-migration for increasing demand on the city’s real estate market and exacerbating pressures on its mobility system. As the area becomes less affordable, the pressure is acutely felt by the unemployed and those working low-wage, low-skill jobs, they say.

The Austin area was recently named as a finalist to land Amazon.com Inc.’s second headquarters and its promised 50,000 high-wage jobs.  However, in the midst of a rising affordability crisis and an apparent workforce skills gap, many in the community question whether that would be best for Austin.

Although considered a high-tech city, Angelou estimates that such jobs account for only 22 percent of Austin’s economy. A large percentage of job growth and openings are middle-skill jobs—positions that require post-high school education or certifications.

Kwee Lan Teo, vice president of talent development and acquisition at the Greater Austin Chamber of Commerce, said the skills gap is most evident in these middle-skill positions. Teo said roughly 60 percent of the area’s job openings in 2017 required post-high school education or certification, which disqualified roughly 63 percent of the area’s unemployed job seekers.

“It’s a challenge,” Austin Mayor Steve Adler said. “What we’re focused on is the mismatch between available jobs and the people that live here in order to slow some of the importing of people to fill jobs.”

Adler said there are only two ways to fight an affordability crisis: make necessary goods cheaper or give people opportunities to make more money.

Last year regional leaders took the first step in attempting the latter through the creation of the Austin Metro Area Master Community Workforce Plan. Touted as the first of its kind in the country, government entities, workforce organizations and educational institutions are coming together to fund and provide opportunities for the region’s unemployed and underemployed to learn the skills and earn the degrees and certifications necessary to qualify for middle-skill, living-wage jobs.

Tiffany Daniels, director of communications with Workforce Solutions Capital Area—a nonprofit organization leading the implementation of the plan—said up-skilling the workforce benefits residents and employers, as it is more cost-effective and reliable to hire local.

Daniels said the goal is to give everyone in the region an opportunity to benefit from the area’s rapid economic growth.

“It’s a great time right now for job-seekers,” Daniels said. “But only if you have the exact skill set employers are looking for. That’s our challenge.”
SHARE THIS STORY