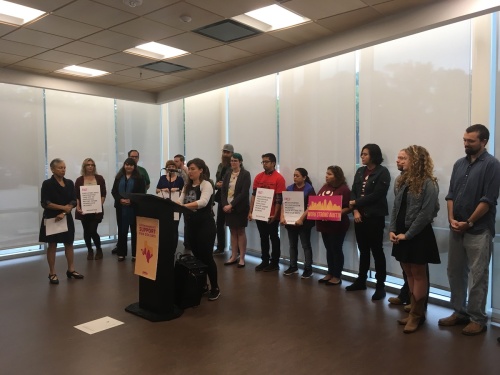 Members of the Work Strong Austin coalition hosted a press conference on Nov. 15 in support of a paid sick leave policy in Austin.

Austin City Council will get its first look next week on Dec. 5 at a potential ordinance mandating paid sick leave for all employees in the city limits.

Nearly 40 percent of workers in Texas lack access to paid sick time, according to a March 2017 briefing paper published by the Institute for Women’s Policy Research.

Among Hispanic workers in Texas, one in two lack access to paid sick time, and among part-time workers fewer than one in four have access, according to the same paper.

The City Council resolved to solicit feedback on Sep. 28.

The resolution states that “providing time off for health or safety purposes can guarantee a healthier and more productive workforce in Austin” by limiting the spread of illness, lowering healthcare costs, closing the gap in paid sick leave offered to low-income and minority workers, decreasing the chance of workplace injury and reducing employee turnover.

It also allocates council staff and resources to the gathering of public input.

A series of three public stakeholder meetings were scheduled for the month of November. On Dec. 5, city staff who have overseen this input gathering process will present a review to the council.

#ATXCouncil resolves to launch stakeholder process aimed at securing access to paid sick leave for all workers in Austin.

Since the resolution was passed, the city has received extensive feedback—from employers, employees, advocate groups and HR and temporary agencies—at meetings, on the online forum it created for this purpose and via text message.

Larry Schooler, who directs the city’s public engagement office, said at the most recent stakeholder meeting on Nov. 16, “This is one of the most robust public discussions I’ve seen.”

More than 100 people were in attendance at that meeting. Some 750 people have responded on the online forum the city established to solicit feedback, many in opposition to the proposed policy.

Schooler also noted that this process “is not a consensus-building exercise.”

Instead, it is intended to help determine who might be covered by such a policy, the amount and rate of accrued paid sick time, when employees may access paid sick time and for what purposes, and how the city would fund the enforcement of this policy, among other topics.

On the online forum, many responders said they felt these questions presume that such a policy will be implemented regardless of the public’s opinion.

Schooler said that although the council has indicated it is interested in a paid sick leave policy by soliciting public feedback, it has yet to draft or vote on any such policy.

Representatives from the business community, including small business owners and chamber representatives, have expressed concerns about a mandated policy.

These include a lack of flexibility to accommodate different sizes and types of businesses, a possible disincentive for employers to hire and operate in Austin, the lowering of wages to make up for the cost of implementing the policy and employee abuse of paid time off.

“I don’t think the city should be in the business of mandating benefits to employers,” Pam Bratton, a representative of the Texas Society for Human Resource Management, said at the Nov. 16 stakeholder meeting.

She works as the vice president of staffing at a temporary agency, where the turnover rate is 700 percent.

Businesses should be allowed to determine their own paid sick leave policy, she said, in order to factor in their own unique circumstances.

“We’re already competing for great talent,” she said of businesses in Austin, where the unemployment rate is low. “Let the market determine the benefits.”

Some business worry about the implementation of the paid sick leave policy for different reasons.

“I am the CEO of a restaurant group that employs 600-plus Austinites,” a user named masonayer posted on the online forum on Nov. 15. “[O]ne of our competitive advantages is the fact [that] we offer paid sick time across the board to all team members. … [I]t would hurt our hiring practices if every restaurant could say they offer comparable benefits.”

Other businesses are not as worried about adhering to the parameters of a mandated paid sick leave policy as they are about the costs of offering paid sick leave at all.

“I could not pay two people to do one person’s job if an employee was out [sick]. I would have to pay both the person on leave and the person filling in for them,” Renee787 posted on the online forum on Nov. 13. “This could very easily put a small business out of business.”

Employees and worker advocacy groups argue that a paid sick leave policy would be as beneficial to employers as it would be to employees.

Work Strong Austin, a coalition of local businesses and nonprofits, submitted a letter to the Austin City Council on Nov. 15 in support of a paid sick leave policy.

“Businesses do best when workers are safe, happy and healthy,” it reads.

When employees don’t have access to paid sick time, the coalition argues, they are forced to make decisions that harm their employer, their families and the community-at-large.

This has implications on public health, residents said.

“When I go out to eat or go to the grocery store, I don’t want the people there to be sick or to get me sick,” Charlene Gelb said at the Nov. 16 stakeholder meeting.

Gelb, an Austin resident and member of the Austin Socialist Collective, supports a comprehensive paid sick leave policy that covers all workers and broadens “sick leave” to include caring for a loved one, attending to legal matters such as a parole hearing, mental health care and dealing with instances of domestic violence.

Without access to paid sick leave, however, many workers have to decide between getting care and keeping their jobs.

“We know from a medical standpoint that workers without paid sick leave are likely to work sick,” Dr. Pritesh Gandhi of the People’s Community Clinic said at the Work Strong Austin press conference.

Those workers are also more likely to send their children to school sick if they are unable to take time off to care for them.

The food preparation and service industries also tend to have low-income employees, who are less likely to have access to paid sick leave than those in higher income brackets.

Only 31 percent of workers in the lowest income bracket, meaning those who earn less than $15,000 per year, have access to paid sick leave, according to the briefing paper.

“For the average American worker without earned sick days, three days of lost pay is equivalent to an entire monthly grocery budget,” according to a paid sick leave fact sheet distributed by Work Strong Austin.

Business owners have voiced concern on the online forum and in the public input meetings about the costs of providing paid sick leave.

“Businesses have to pay for this somewhere,” Bratton said. “It’ll compress wages.”

The city will also have to pay to enforce this policy. Determining how to provide this funding is one of the topics of discussion on which the council is requesting public feedback.

Employees and worker advocates, however, believe that a paid sick leave policy is an essential worker’s right in the same way that minimum wage is.

Like the minimum wage, a paid sick leave policy creates a floor, or an absolute minimum, for what workers are due, according to Bo Delp of the Workers Defense Project.

Delp directs to WDP’s Better Building campaign, which advocates for higher wages and improved safety standards for construction workers in Texas, more than 70 percent of whom don’t have access to paid sick leave.

“These costs are being pushed around to people already,” Delp said at the Nov. 16 stakeholder meeting.

Workers may risk their jobs when staying home to recover from an illness or taking care of a sick child or parent. Employers, on the other hand, have to pay to hire and train a new employee when they fire someone for missing work because of sickness.

So far, the stakeholder process has shown that there is plenty of debate as to whether the city council should implement a paid sick leave policy.

“We’ve heard a lot of opinions from a lot of people,” Gelb said after the Nov. 16 stakeholder meeting. “It’s a productive process.”

Although turnout for that meeting was larger than expected, Schooler was pleased.

“Tonight was the good kind of problem for someone like me to have,” Schooler said.