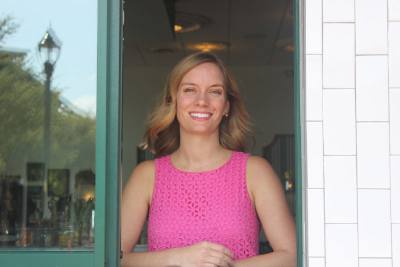 When Ashley Fric and her husband, Sean, moved to the Mueller neighborhood in 2009, there were still runways on the ground.

The former municipal airport has since turned into a bustling mixed-use development.

In 2018, the couple moved into a second home, of sorts, with the opening of Colleen’s Kitchen, a full-service restaurant serving Southern cuisine.

“We want to be a place for the neighborhood to gather,” Ashley said.

The restaurant is named for Ashley’s aunt.

“She was just that matriarch of our family,” Ashley said, adding that visiting her always felt like “an event”—whether it was a big Easter meal or an after-school treat of hot tea and cookies.

Ashley has worked to bring her aunt’s spirit of generosity and hospitality to the restaurant, from the figurines that line the walls to the vintage plates on which the food is served.

She has also drawn on her experience in the restaurant industry, from waitressing in high school to working with her husband at J. Black’s, a bar on Sixth Street that closed in 2018.

But after 10 years, and with a young family, she said it grew harder to close the bar down at 4 a.m.

Opening Colleen’s Kitchen allows Ashley to remain in the industry during this new stage.

Following in her aunt’s footsteps, Ashley said she loves creating experiences for her guests.

“Because it is Southern cuisine, because it’s a family environment, we wanted folks to come here and be taken care of,” she said.

Ashley said she looks out for each individual guest’s needs, from the family having brunch after church to the group of friends out for happy hour to the vegan diner looking for a special meal to her staff, who share a meal before each shift.

“Everyone has a different need, and we want to be able to fill all of those,” she said.
SHARE THIS STORY