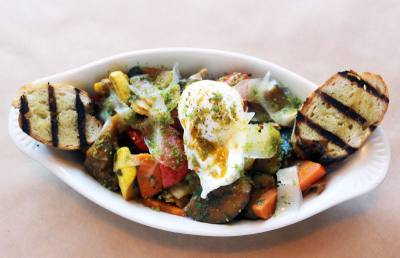 The pisto manchego is the Spanish version of a French ratatouille.

It was a short stint living with his wife in Europe that Café Malta owner Nick Goulding said solidified his love for the cuisines, techniques and ingredients found in the Mediterranean.

“We had spent months cooking meals based on what was available and speaking to the locals and our landlady to find out what they would do with certain ingredients,” he said. “It formed the way we cooked when we got home.”

Having spent years in the bar and restaurant industry, Goulding said at first his ideas for Café Malta were grandiose. Over time he learned to satisfy his customers and staff by offering a rotating menu that includes seasonal dishes as well as year-round favorites, such as the brisket ravioli—a nod to both Texas and Italy—featuring fresh housemade pasta stuffed with chardonnay-braised brisket and tossed in a pesto sauce made with Texas pecans, parsley, garlic and parmesan reggiano.

“Mostly, our menu is led by ingredients first,” he said. “When I’m doing a new seasonal menu, I first look at the protein we are working with. If the menu is drifting toward Italian, for example, I’ll add something from the Middle East.”

Rather than offering stereotypical dishes from each Mediterranean country, Goulding said he tries to tie each cuisine together by highlighting common ingredients, many of which are sourced locally.

“We want to play up the entire region and hit different notes without it feeling as if ‘here’s Italy and here’s Spain,’” he said. “We try to use names that are our own instead of being too on the nose with the location that inspired [the dish].”

Still, Goulding recognizes that some customers are looking to try specific cuisines. With that in mind, Goulding began offering the “Tour de Forks.” Held every first and third Tuesday each month, guests are treated to a four-course menu unique to a country or region, as well as a complementary aperitif.


Get to know Malta

Located south of Italy in the Mediterranean Sea, Malta’s strategic location has led to a succession of occupiers, including the Phoenicians, Carthaginians, Romans, British, French, Spanish, Greeks and Arabs. The official language is Maltese, the only Semitic language that uses the Roman alphabet. Malta is today part of the British Commonwealth.