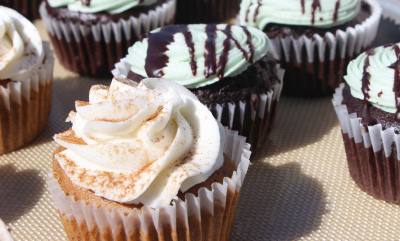 The freshly made chicken pot pie available on the lunch menu at Skull & Cakebones is so carefully curated that customers might never know it is vegan unless they were told, the eatery’s owners claim.

Although Ruby later outgrew her allergy, Biesi said she continues on a dairy-free trajectory simply because she enjoys the challenge of creating plant-based dishes.

The bakery and coffee shop offers classic options such as turnovers and cupcakes but with a concealed meat and dairy-free twist.

“I can’t imagine doing anything else other than [baking at Skull & Cakebones],” Biesi said.

Berenji, who has a graphic and web design background, said opening Skull & Cakebones has allowed her to channel her creativity. Growing up, her father owned restaurants, she said, so food has always played a significant role in her life.

“They say everything in life leads up to that one moment,” Berenji said. “[Owning Skull & Cakebones] is that moment.”

Four-and-a-half years ago, Skull & Cakebones opened as a wholesale business selling vegan cupcakes. Over time Berenji said the business grew and in January 2017 the pair opened their first brick and mortar location just west of Southwest Austin on Hwy. 290 in Dripping Springs.

The bakery serves lunch daily and offers brunch on the weekends. Keeping the meat-eaters in mind, Biesi said she created a menu using vegan products that taste similar to non-vegan foods, such as the FLT sandwich, which is made with vegan-friendly bacon—or “facon”— lettuce and tomato.

“We wanted to offer a healthy alternative outside of a salad that tastes good,” Berenji said.