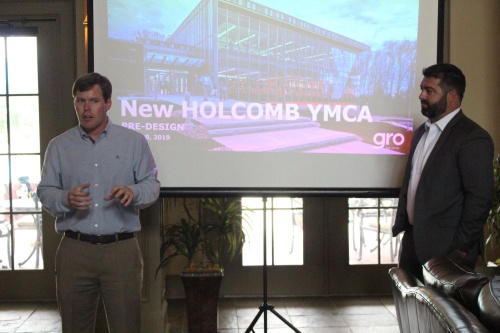 The Greater Houston YMCA announced its intent to build a long-awaited new 10-acre branch in the Falls at Imperial Oaks area during a stakeholder meeting June 20.

While the meeting was meant to get feedback from area homeowners’ association presidents, YMCA representatives, developers and county representatives, officials confirmed construction on the Holcomb Family YMCA north of the Grand Parkway is scheduled to begin by the end of July 2021.

Brian Rigby, director of design for YMCA designers Gro Development, said the new branch is still early in its predevelopment stage and several factors will contribute to its design. The YMCA will actively seek community input as it is designed, he said.

The project was delayed in February 2018 after Hurricane Harvey damaged four Greater Houston-area YMCAs in 2017.

Community Impact Newspaper previously reported the Holcomb Family YMCA was planned to be built on a 10-acre tract of land that was donated by 830 Investors Ltd., which is the Holcomb family’s partnership. The area overlooks a 100-acre lake known as Lake Holcomb.

The size of the new facility will depend on the amount of donations received, though plans will be developed for a smaller facility if the total desired amount is not met, officials said. Brian Kridler, YMCA vice president of strategy and innovation, said the new facility could cost around $15 million.

“They are not chomping at the bit to put their name on a roof, boiler or treadmills,” he said.

Concepts such as variously sized indoor and outdoor pools, group exercise rooms, science labs, teen rooms and indoor tracks were discussed during the meeting, though Rigby said the facility may change through its development cycle depending on the wishes of donors.

The new facility is anticipated to serve a 5-mile radius around Imperial Promenade Drive, located just north of the Grand Parkway. Kridler said local facilities tend to have a draw from about 10 minutes away.

Kridler said there are currently two other YMCAs in The Woodlands area, but they are located west of I-45.

Once the new facility is opened, Kridler said YMCA will pursue partnerships in order to best serve the community.

“We start with needs and work from there,” he said.

Discussions have been held regarding the location since 2013, and a quick turnaround is anticipated once the ground is broken in 2021.
SHARE THIS STORY