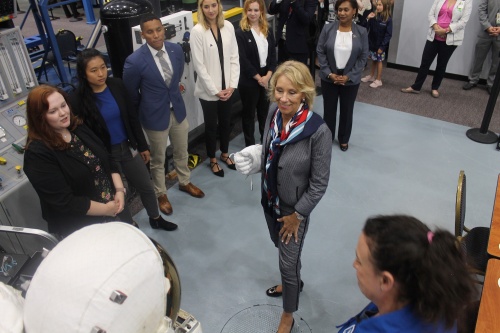 U.S. Secretary of Education Betsy DeVos on June 5 made a stop at the Johnson Space Center as part of a tour to learn how local education leaders and employers are closing skills gap between workers and in-demand jobs.

During her tour, DeVos walked through ISS mockups, sat inside a replica of the Orion Spacecraft, signed a space vehicle hatch, tried on the glove from a spacesuit, and met and spoke with interns and NASA personnel, including Serena Auñón-Chancellor, an astronaut who came back to Earth in December after spending six months aboard the ISS.

Part of DeVos' tour included a visit to Mission Control, where she got to speak live to astronauts aboard the ISS. She spent the morning at S&B Engineers and Constructors’ Craft Education and Skills Enhancement Center in Baytown to learn about a welding apprenticeship program.
SHARE THIS STORY