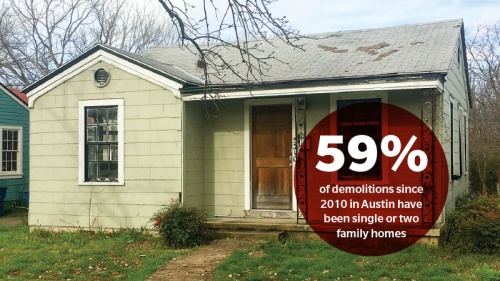 This 1941 single-family home at 5310 Roosevelt Ave in Central Austin was approved for demolition on Feb. 8.

Since 2010, Austin has seen 7,310 demolitions, 4,346 of which have been single or two-family homes, according to city numbers as of Feb. 4. With demolition counts rising, the city is eyeing potential safety improvements to the process and although some community members say those changes are too conservatives, others warn over-regulation could exacerbate ongoing real estate affordability issues.

Late in 2018, the city’s development services department published a 134-page report outlining strategies to address concerns raised over the safety of demolitions—a response to a 2017 audit that criticized Austin’s lax safety standards. Although changes were scheduled to happen by March 2019, city staff said hang-ups between the departments and city council have pushed that timeline back to late summer.

A central piece to the criticism honed in on mitigation of asbestos and lead paint in the city’s older structures. For residential structures under five units, Austin currently does not regulate asbestos or lead paint levels before releasing demolition permits. For larger multi-family projects and commercial projects, the city defers to state regulations, which say tests must be completed by a licensed professional and sent to state offices. The city does not verify that a site is properly prepared before releasing a demolition permit, which leaves open the possibility of environmental or utility damage, nor does the city require qualifications for demolition contractors.

“We have an ability to hold developers to a higher standard than state law and I think we should,” said District 9 Council Member Kathie Tovo, who represents Central Austin, which has seen the highest rate of demolitions. “We owe it to the community to make sure these demolitions, when they occur, are being done in a way that’s safe to properties around them.”

Local residential infill developer Scott Turner said the demolition process can shake up a lot of dust in the air, but said there is little data or knowledge of exactly how much asbestos or lead paint it contains. Due to the cost associated with asbestos and lead paint abatement—which Turner said can run up to five figures—he said he would not support increasing local residential regulations beyond state and federal requirements, which he called “widely accepted” as adequate.

Jeff Jack, former president of the Austin Neighborhoods Council, an organization representing homeowners in most urban core neighborhoods, agreed that testing and abatement on every demolition can be too expensive, but said the city should consider at least requiring testing for the chemicals before demolitions of older housing stock, and then require abatement if found.

“An age-based demolition permit process seems to be a reasonable approach,” Jack said.

Turner said the “good demolition teams” will hose down the structure before demolition to mitigate the dust. However, the city does not have a process of requiring demolition contractors to be qualified, which is a priority Austin’s development services department is preparing to address, building official Beth Culver said.

Culver and Turner said although the asbestos and lead paint abatement conversations divided community members and developers, there is wide buy-in for requiring demolition contractors to be registered as a qualified with the city.  An unqualified demolition team heightens safety risks, Culver said, and a new contractor registration process would filter out the bad actors.

San Antonio uses a contractor registration process; however, neither San Antonio, Houston nor Dallas have local regulations on asbestos and lead paint abatement. Although the issues were lightly addressed in the development services report, Culver said were the city to pursue either regulation, each would require its own in-depth research and stakeholder input process.

However, Culver said the city will address the issue of unprepared demolition sites this year, by requiring on-site pre-demolition meetings before a permit is released. Often times, she said, demolition permits are released and the building is immediately taken down without the city ensuring the utility water pipes are capped, the electricity has been properly switched off and the potential for dangerous runoff materials has been mitigated.

Adjacent properties have also never received an official heads up before a demolition takes place. City staff is pursuing that ordinance change now to ensure neighbors are properly notified. Culver said the amendment will go through planning commission and then City Council for a final vote, due by the end of this year.