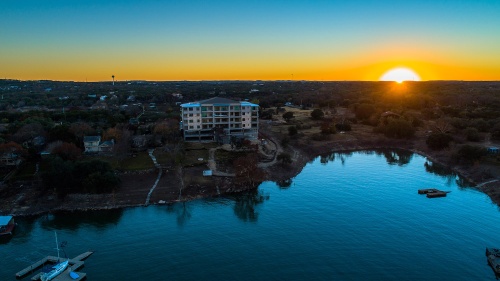 The Hudson on Lake Travis is about two weeks away from completion and is now accepting leases.

The Hudson on Lake Travis, a luxury multifamily complex located in Hudson Bend, is weeks away from completing construction on Phase 1 of its development and is now accepting leases, according to a press release issued Dec. 10.

The Hudson, located at 16100 Lake Travis Drive, Austin, has 32 one- and two-bedroom apartments in a six-story, midrise building on Hudson Bend next to Lake Travis Marina. Every rentable unit is on the lake with lake views. The development also features four short-term rentals that take up the first floor and will be furnished and managed on-site.

"Inside each suite, you will find 12 ft high ceilings, open floor plans, wide walkways, architectural details, granite countertops, stainless steel appliances and floor to ceiling views of the lake and marina, all with private patios," the release states.

Other amenities include underground parking, oversized garages and a pool with a swim lane, the release states.

Mark Goldman, leasing agent for Hudson on Lake Travis, said that construction problems delayed a projected completion goal of late summer 2018, but now, barring any unforeseen circumstances, tenants should be able to move in by late December.

"We've got two already leased, and we've got another 20-plus left over," Goldman said. "So we're just getting started."

So far the majority of units for Hudson on Lake Travis are still available for lease, Goldman said.

Prices are subject to change, but the release states rents start at $1,695 and go up to over $3,000 for one- and two-bedroom apartments.

Goldman added that Phase 2 of Hudson on Lake Travis is still planned and will likely have many similarities to Phase 1, but it could still be several years away from completion.
SHARE THIS STORY