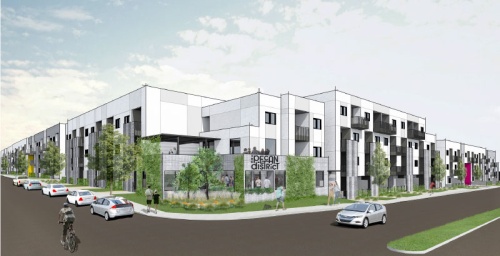 Per terms of the deal, the development must construct a certain amount of infrastructure improvements inside the development's 67-acre site and along West Pecan Street in order to receive the possible full reimbursement of $45 million by 2025.

"[The TIRZ amendment] is not a new tax. It actually redirects taxes," Pflugerville Assistant City Manager Trey Fletcher said. "I want to clarify it is also not a tax abatement."

Presidium Group LLC and Cid Galindo, developers of the Pecan District, will receive reimbursement through the city's TIRZ, an economic development tool used to fund public infrastructure in a development using property taxes generated in the TIRZ boundaries.

The city of Pflugerville has a lone TIRZ—referred to as the Falcon Pointe TIRZ—that was established for developments east of SH 130. Pflugerville City Council voted to amend the defined boundaries of that TIRZ to include the Pecan District development.

The Pecan District, located near the southwest corner of Heatherwilde Boulevard and West Pecan Street, will become the only development in Pflugerville's TIRZ that is located on the west side of the city.

Terms outlined in the TIRZ amendment mandate that no more than 500 residential units of any type shall be constructed until at least 50,000 square feet of commercial space is added to the development.

If the terms are followed as outlined in city documents, the Pecan District site is expected to construct a combined $45.2 million worth of public parking garage space and infrastructure before the end of the year 2025. Developers will pay more than $10 million in non-reimbursable funds for parking garage construction.

Wallace told council that private capital is investing more than $393 million in the Pecan District over the first five phases of development.

The Pecan District is being proposed as a mixed-use urban center with plans for apartments, office space, retail space, hospitality areas, recreation areas and spaces for civic use, according to city documents. Construction of the development is expected to occur over 10 total phases, with a total of 1.58 million gross square feet of residential, retail and office space delivered by the end of the fifth phase.

Developers broke ground on The Elliot, a 272-unit apartment complex inside the Pecan District and the development's first project, on Oct. 26.

Wallace told Community Impact Newspaper that the development will create more than 3,000 primary-sector jobs and 330 retail jobs if included in the city's TIRZ, with an estimated $600,000 in annual sales revenue, $4.8 million in annual property tax receipts and $380,000 in yearly hotel occupancy taxes.

Fletcher stated the city will continue to see revenues from sales taxes, administrative fees, operations fees, development and permit fees, impact fees and utility revenues during the life of the TIRZ deal. The Pecan District will also pay the city $250 "per door" to cover the cost of operational costs of city services that will need to be provided to the residential areas of the development.

The TIRZ amendment had considerable push back from residents speaking in opposition to the ordinance.

Four Pflugerville residents spoke in front of council in opposition to the TIRZ amendment, and another handful submitted oppositions to the council in written form.

Several of the speakers expressed concern over the scope of the investment, stating the tax incentives were too expansive.

"This project cannot sustain a $45 million subsidy," Melody Ryan, a Pflugerville resident, told council. "We do not need to incentivize residential [development]."

Other residents told council the Pecan District development would increase their property values to unsustainable rates. Bob Rickenbach, a Pflugerville senior citizen resident, told council that he was concerned the development may eventually force him out of his home.

"The appraisals are going to go through the roof and for me that’s a big problem," Rickenbach said. "[Seniors] will be very negatively affected by this whole process."

Coleman recalled the economic development incentives that the city gave Stone Hill Town Center in its early stages, saying the council took some political heat for the vote at the time.

"If we didn’t have that we would still be driving to Round Rock and Cedar Park [to shop,]" Coleman said.

City staff will work with the Falcon Pointe TIRZ board and the developer on final terms of the development agreements in spring 2019, Fletcher said.

The Falcon Pointe TIRZ amendment requires a second public hearing and will be voted on Dec. 11. Throughout discussion on the agenda item, council members Mike Heath and Rudy Metayer requested additional information from city staff and the developer before they vote on the amendment.

"The reason I voted against the project was due to the fact that many of the details that we discussed during our council meeting weren’t captured in the document in front of us. This included the conversion of the parking garage to office space in the next 20 years," Metayer said in a statement provided to Community Impact Newspaper.

"Once this component and more details [come forward] regarding the project benchmarks and what landmarks this project must hit in the next 4 years before it even receives any funds from the TIRZ, I’ll feel more comfortable with what the Pecan District can truly bring to our citizens and help show that the growth and development of our community isn’t just apportioned to one area of the community."
SHARE THIS STORY