PHOTOS: Austin’s MLS soccer team has a name and a logo 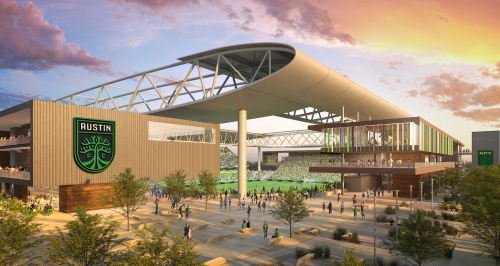 It’s relatively common for The Butler Bros., an Austin-based brand studio, to work on confidential projects. The company works with companies that do not always want to telegraph the direction they are going with marketing. However, according to Erik Enberg, creative director with The Butler Bros., it is not common to have the amount of public interest in a project as he noticed when the studio was working with Major League Soccer.

“It’s rare you work on something where you walk out into your neighborhood and you can hear people talking about it and having opinions about it–and you didn’t bring it up,” Enberg said. “Because of that, yeah we felt the need to make sure we were doing something that would resonate with everyone.”

Precourt Sports Ventures, the investor-operator group of MLS team Columbus Crew SC, plan to bring a team to Austin in time to begin the 2019 season in March. Prior to Wednesday, the team had no name or badge—just a green-and-white color scheme for the “MLS2ATX” marketing campaign.

That changed Wednesday, when PSV and The Butler Bros. unveiled the team name–Austin FC, and a badge featuring intertwined oak trees.

“We explored a lot of different names and it was clear through community engagement, through people that we talked to, Austin needed to be the brand,” said Marty Butler, founder and creative chief of The Butler Bros. “It’s about the city. That’s why we went there. It feels really right.”

Marty’s brother, Adam Butler, said a few different names and badges were in play for the team, but the desire to put Austin’s brand first and foremost won out in the end.

“Our name is our place. Our place is our name,” he said. “We feel like there’s a lot of equity crackling off Austin as a brand.”

PSV and The Butler Bros. announced at the name and logo at a fan appreciation event Wednesday night at Austin’s North Door. Vanessa Fuentes, a supporter of bringing the team to Austin and member of the Greater Austin Hispanic Chamber of Commerce, said she was pleased with the branding.

“You can go anywhere throughout the world, travel wherever. People ask where you’re from and if you say “Austin, Texas,” people instantly know. I think it’s a great recognizable brand,” Fuentes said.

The team name and logo announcement comes even as some are questioning the team’s ability to begin play in Austin in 2019.

On Tuesday, Travis County Commissioners voted to authorize the County Attorney to challenge the tax-exempt status of PSV’s use of city property. Under the terms of the agreement with the city, PSV would lease a city-owned parcel of land in North Austin while the city would retain ownership of the land and stadium–exempting PSV from property tax payments.

Meanwhile, the city of Columbus and Ohio Attorney General Mike DeWine have brought a suit against the team in Ohio in an attempt to keep the team in place.

DeWine and the city say the team must give Columbus officials notice of at least six months before any move and, during the notice period, must provide potential local owners a “reasonable opportunity” to buy the team.