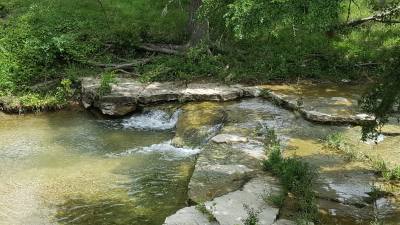 The Barton Springs salamander, a federally listed endangered species, has been found near the discharge point proposed by the city of Dripping Springs.

In 2015 the city of Dripping Springs applied for a permit to discharge 995,000 gallons of treated wastewater into Onion Creek per day, sparking heavy pushback from Austin residents who voiced environmental and sanitary concerns. Dripping Springs has maintained its draft permit contains "stringent effluent limits" and that the city plans to use the majority of the effluent for irrigation purposes. The Texas Commission on Environmental Quality, issued a draft permit in 2016. After the Environmental Protection Agency withdrew its initial contest to the permit in 2017, the TCEQ was ready to decide the fate of the permit.

To create more certainty around the agreement, city staff in December proposed Austin City Council approve a settlement agreement with Dripping Springs outlining specific requirements and expectations between the two municipalities. However, after resistance from the public, City Council instead chose to contest the original permit after learning that wastewater could cause aesthetic and environmental hardships for Onion Creek and Barton Springs, which are connected through underground aquifers.

Chris Harrington, engineer with the Austin Watershed Protection Department, said the fate of a contested permit is uncertain.  He said even if an administrative judge rules in Austin’s favor, the decision lies ultimately with the TCEQ, which received the green light on the permit from the EPA. Harrington said while no precise timeline exists, he expects the state to take up the case by February.