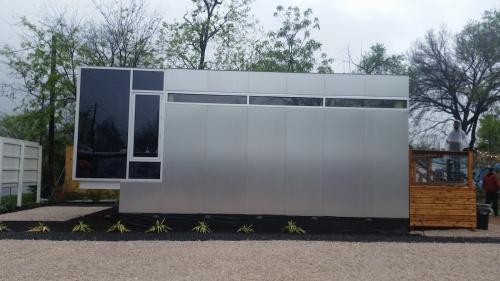 Less than a year after presenting his prototype, Kasita CEO Jeff Wilson—better known as "Professor Dumpster" from his time living in a 33-square-foot dumpster—debuted his microhouse on Austin's east side during the opening day of South by Southwest Conferences & Festivals.

Coming in at a snug 352 square feet, the Kasita house can be yours for $139,000. The first house will be delivered at the end of June, but prospective buyers can tour the model home at 1304 E. Fourth St.

The application for orders opened Friday, and while the company will not reveal how many orders it has received since Friday, Kasita Director of Communications Courtney Lowell said they are "overwhelmingly pleased" with the demand.

"Everything is designed with the idea of user experience," Lowell said of the microhouse. That means smart home technology, greater use of storage space and easy delivery—Kasitas are manufactured in a factory in a few weeks and delivered in one piece via flatbed truck.

By December, Kasita hopes to start selling stackable houses. Imagine nine tiny homes, one on top of the other, accessible by an exterior, covered elevator, on a lot that would otherwise be unusable, Lowell said.

The houses on sale now even come with a discount—buy three or more, and the price drops to $119,000 each.

Lowell said, eventually, the company hopes to see the units sold for an even more affordable price.

She said Austin was the perfect place to create and debut the Kasita, outside of technology-heavy areas ,such as Silicon Valley and New York City. Austin, she argues, is the "quintessential" place to launch Kasitas because of its current housing situation.

Community leaders have said the key to making Austin affordable is to make affordable housing available. According to data from the Austin Board of Realtors, the median single-family home price in Austin rose 10.6 percent to $345,000 since September 2015. The National Association of Homebuilders reports for every $1,000 increase in the median home value, 1,285 Austin families can no longer afford the market.

Lowell said the idea is to place Kasitas in underutilized spaces—rooftops, parking lots, areas that are too small to build conventional houses or apartments. And similar to an iPhone, Kasitas are able to be mass-produced because there is not much customization, so it is less expensive to manufacture.