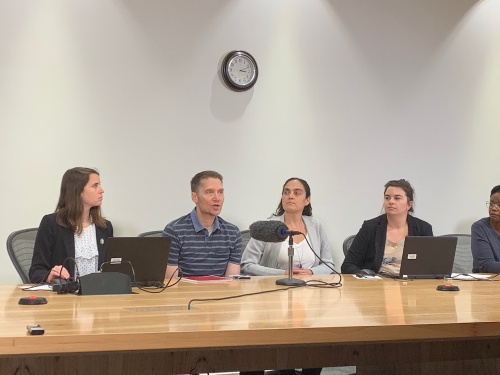 Brent Lloyd and Annick Beaudet, center, speak about a new draft of the land development code at an Oct. 4 press conference.

After years of development, the city of Austin released its latest draft of a new land development code, including revised zoning maps, at a press conference Oct. 4.

Proposed changes include the creation of transition zones, which are geared to provide missing middle housing in high-opportunity areas that are well connected to transit; fewer parking requirements; improved environmental protections; an expansion of the city’s density bonus program; and a more user-friendly format.

The rewrite process began in 2012 and has been mired in controversy, including the six-year, $8.5 million effort called CodeNEXT, which City Council voted to abandon and start anew in August 2018.

This new version aims to be more accessible and user-friendly than previous drafts and the current code, staff said, and to improve the city’s permitting process by scaling application requirements to the size of the proposed project.

“With this code, we are looking to simplify how we’re growing and guide growth where it can do the most good,” said Annick Beaudet, assistant director of the city’s transportation department.

Two issues of contention in past drafts have been single-family zoning and the ability to build accessory-dwelling units.

Despite a previous proposal released by city staff Aug. 13 that would have prohibited single-family homeowners from demolishing their existing structure to build a new single-family structure, this latest proposal allows broader rights for homeowners based on feedback from the public.

“We expect this to be an item for discussion in the public process,” Lloyd said.

Additionally, accessory dwelling units, or ADUs, are allowed in all residential zones under this proposal, a change from previous versions.

"There's a lot that we like about this," Mayor Steve Adler said of the new draft in a Facebook video posted Oct. 4.

City residents interested in learning more about the proposed code and how changes might affect individual sites can use an interactive map prepared by the rewrite team. The tool provides side-by-side comparisons of the proposal and the current code as well as zoom and address search functions.

Following this release, the city will host a series of open houses to educate and inform the public about the proposed changes.

The planning commission will also hold a public hearing on the topic on Oct. 26, before making recommendations to City Council on Nov. 12.

Council is scheduled to consider the proposal for the first time on Dec. 5.