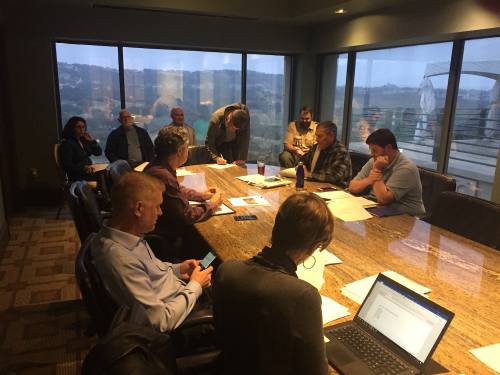 The River Place Board of Directors, shown here during a March meeting, has been told by the Texas Parks and Wildlife' Recreation Grants Branch that it must immediately terminate a $10 fee it has been charging non-residents to use its nature trail.

Update: A representative of the Texas Parks and Wildlife Department has confirmed Tuesday morning, Sept. 17 that the department is in the process of scheduling a meeting with the River Place Limited District, but neither entity has provided a time frame for when that meeting might take place.

Editor's note: This story will continue to be updated as more information becomes available.

Though members of the River Place Limited District Board of Directors have repeatedly argued that a $10 fee per person and per pet to use its Woodland Park nature trails during specified times is reasonable, the Texas Parks and Wildlife Department officially disagrees.

In a letter dated July 23 obtained by Community Impact Newspaper and addressed to Scott Crosby, president of the River Place Limited District, TPWD Recreation Grants Branch Director Dana Lagarde stated that a $10 fee per person and per pet is not justified.

"It has come to our attention, through many citizen complaints, that a $10 non-resident pedestrian and pet fee is being imposed for the usage of the Woodlands Park Nature Trail," the letter states. "TPWD does not find this fee reasonable nor is it comparable with other state or local public facilities; therefore, this fee is prohibited by the terms of the grant agreement and must be terminated immediately."

The agreement refers to a $500,000 grant issued to the River Place MUD on Aug. 30, 2001, for the partial acquisition and full development of Woodlands Park, according to the letter, as well as documents obtained by Community Impact Newspaper. TPWD said in late August that the state parks agency was "looking into" the legality of the fee.

Guidelines from the Texas Recreation & Parks Account Program in the same document stipulate the project sponsor “…will permanently dedicate for public park and recreation use all project area(s) which receive TRPA assistance, as required by Chapter 640.1.2 of TRPA Grants Manual Guidelines.” River Place Limited District informed the public in early March that it would charge people living outside the limited district to use the trail.

Board President Scott Crosby said Aug. 23 that $35,600 has been collected from trail users, with $35,000 going back into the maintenance and operations of the district’s parks and trails. In the same late August interview, Crosby also said he had not yet received any correspondence from TPWD regarding the trail fee—but it could have been sent to a representative of Inframark, the limited district’s management company.

Crosby followed up Sept. 16 to explain that at the time of his initial statement he had not yet seen the letter. A decision on the fee's fate has not yet been made.

"At the time, I had not yet reviewed the letter," Crosby said Sept. 16. "We did have a board meeting subsequent to that, and we discussed it with our attorneys, and our attorneys have been in contact with Fish and Wildlife [TPWD], and they would like to meet with us."

Crosby said the River Place Board of Directors is working to arrange a meeting with TPWD to discuss the letter, but said there is no date yet established for such a meeting.

Community Impact Newspaper has reached out to Texas Parks and Wildlife for more information.

Editor's Note: A follow up story has been posted with new information from Sept. 17