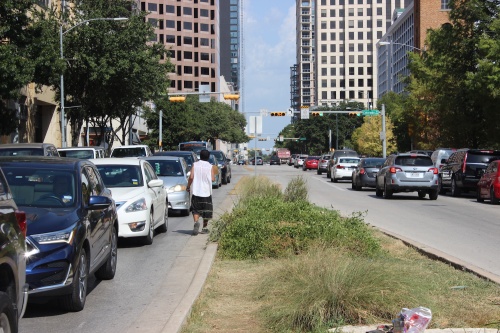 A man holds a sign as he walks through traffic in downtown Austin.

Throughout the summer, Austin's city leaders and its homeless service providers have held panel discussions to hear questions from the community about how to address the issue of homelessness.

On Sept. 3, in a panel discussion at St. Edward's University, audience members made it clear—both with questions written on note cards and passed to moderators and with questions shouted angrily at the city leaders on stage—that public safety is on the top of their list of concerns.

About 30 minutes into the Sept. 3 event, the discussion was delayed when members of the audience shouted down the panelists angrily, with some recording video of the scene on their phones.

When the panelists were given a chance to speak again, Mayor Steve Adler responded to the audience members.

Adler said that criminal behavior in Austin—such as public urination, assault, or aggressively approaching another individual—is still criminal behavior, and council's June decision to legalize sitting, camping or lying down in certain areas of the city did nothing to change that.

"Nothing council did takes away the ability for the police to arrest people," Adler said.

Based on what the mayor said he has heard from Austin Police Department chief Brian Manley, Adler said he does not believe police have stopped enforcing laws such as public urination or blocking a right of way, but if residents do witness those actions from police, Adler encouraged them to take down a badge number and report that to either Adler or Manley.

The panelists spoke about how homelessness will be addressed in the upcoming budget, the ongoing process to create exceptions to the ordinance passed in June, and the scope of the challenge.

Quinn also spoke about her personal experiences walking to work at the Caritas of Austin office located at 611 Neches St., across the street from the city-run Austin Resource Center for the Homeless. She said in 15 years, she has felt threatened only twice, and one one occasion another homeless individual stepped in to de-escalate the situation.