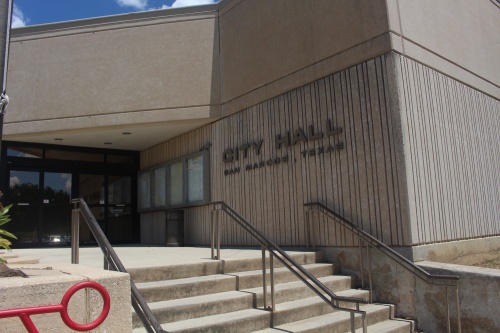 The city of San Marcos is looking at some major changes to city staff, including a new assistant manager and a new acting police chief.

City Manager Bert Lumbreras, in a city memo dated Aug. 27 and addressed to City Council, wrote that Stephanie Reyes, who has been serving as the chief of staff since February 2018, has been appointed to serve as interim assistant city manager.

“Stephanie [Reyes] has been a dedicated and well-prepared leader in our community for the last 18 years working in various capacities within our organization,” Lumbreras wrote in his Aug. 27 memo. “She has demonstrated her steadiness, commitment to create a strong team and just as importantly, someone who works hard to establish credibility and respect.”

In the same Aug. 27 memo, Lumbreras also wrote that San Marcos Police Chief Chase Stapp will serve as the city’s interm “director of public safety” starting Sept. 3. Stapp was hired as the city’s police chief in 2014.

“This is a newly created position in my office to specifically oversee police, fire, emergency management, municipal court and neighborhood enhancement,” Lumbreras wrote.

Robert Klett, who has been a police officer in the city for more than 29 years, will be replacing Stapp as the city’s acting police chief.

The City Council will consider confirming Klett's promotion at a meeting scheduled Sept. 17, according to a city of San Marcos press release published Sept. 5.

Before being named the acting chief, Klett was an assistant chief of the San Marcos Police Department—a title that he has held since 2014, the release stated.

One of the major responsibilities he has had during his career in the city is overseeing the city’s school resource officer program with San Marcos CISD. He has also worked for Texas State University’s police department.

“I’m really excited about having a great department to serve. We have a community that has great support for us, which is always appreciated,” Klett told Community Impact Newspaper. “We’ve had great leadership under Chief Stapp and we’ll keep on taking that forward and serving our community.”

In the past, San Marcos’ police and fire chiefs have been overseen by the assistant city manager.

Under the new structure, Klett, along with other heads of public safety departments, will report to the newly created director of public safety. Klett said he is looking forward to working under Stapp, who has been a mentor to him.

“It has always worked very well, and we’ve always had great public support, but in this new role, we’ll be answering to somebody who did come up through the public safety field,” Klett said. “It just helps you when you’re trying to answer questions to City Council—or something else—to have that background and daily knowledge of what goes on in those services.”

Changes to city and department leadership, according to Lumbreras’ memo, was due to the retiring of Assistant City Manager Collette Jamison.

Lumbreras described Jamison’s departure as a “huge loss,” but celebrated the city’s “ability to place the right people in the right places to achieve continued success.”

“Accordingly, this plan is no different and I am proud of our staff who are stepping up in these key essential roles,” Lumbreras wrote.

Editor's Note: This post has been updated to include more accurate information about Acting Police Chief Robert Klett's job titles and additional information from the city of San Marcos' Sept. 5 press release.
SHARE THIS STORY