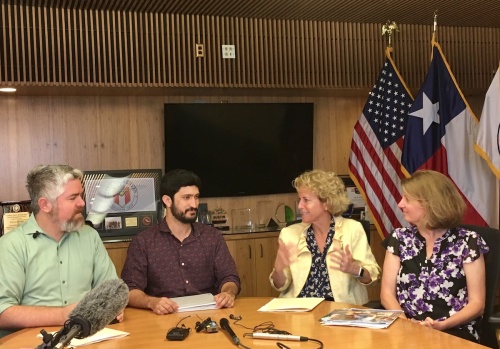 From left: Council Members Jimmy Flannigan and Greg Casar were joined by Ann Howard, the Ending Community Homelessness Coaltion executive director, and Cathy McHorse, the vice president of United Way for Greater Austin's Success by 6 program, to discuss the effort to repeal the tax break and reinvest the money in the city's homelessness and child care initiatives.

Although the properties have been within the full jurisdiction of Austin since 1891, roughly 400 properties along Lake Austin, many of which are worth millions of dollars, have not paid any city property taxes for more than three decades.

City Council members are pushing to repeal the tax break passed by former Mayor Frank Cooksey's City Council in 1986, which they are now calling a "Mistake on the Lake." Council members said the property owners have essentially been receiving fire, EMS, police, library and parks services for free on the dime of taxpayers throughout the city. An ordinance change brought by City Council Members Jimmy Flannigan, Greg Casar, Kathie Tovo and Mayor Pro Tem Delia Garza aims to repeal the law June 20.

“When we first found out about this earlier this year … at first, it felt impossible; there’s no possible way this could be happening in our city,” said Flannigan, a representative from Northwest Austin's District 6. “These property owners are Austinites; they are in the city. I’m excited to see us return to a taxpayer fairness system, where every person who is receiving services in the city is taxed fairly for them.”

Casar, whose District 4 reports the lowest income in the city, said there was a general “feeling of unfairness” when he found out about the situation.

“There is a big opportunity cost; there is a real loss of our ability to fund adequate services across the city if city taxpayers are having to subsidize this part of the city with services,” Casar said.

The council members said these properties need no subsidy: The average market value of homesteads in the area is $2.5 million, with many of the properties priced at over $10 million.

The city estimates that in 2018, Austin lost $3 million in property tax revenue due to the break offered to these properties. The effort to repeal the tax break comes as the city strategizes how to deal with the tighter tax revenue caps imposed by the state Legislature.

If City Council is able to repeal the tax break June 20, Casar said there would be no retroactive collection; however, there is uncertainty on when the properties would begin paying taxes. City staff is aiming for the 2019-20 fiscal year; however, the Travis Central Appraisal District—the government arm that handles tax issues—said the properties may remain off the hook until the 2020-21 fiscal year.

Paired with the ordinance to repeal, City Council members Casar, Garza, Tovo, and Natasha Harper-Madison will also propose a resolution that directs the city manager to not only collect the taxes as soon as possible, but also draft a report on how the funds could be invested in the city’s homelessness and child care initiatives.


How the tax break happened

In 1986, there was a push from property owners along Lake Austin who said they were not receiving adequate services from the city and thus should be exempt from paying city property taxes. The mayor and council at the time agreed and passed an emergency ordinance to adjust the tax rolls.

“The city has not regularly and routinely provided comparable municipal services such as construction and maintenance of street, water, and wastewater facilities, or police and fire protection because of the difficulty in economically providing such services to the very sparsely populated suburban areas clustered along the rugged terrain on both sides of Lake Austin,” the 1986 ordinance read.

Although now treated as a limited-purpose jurisdiction on the tax rolls, the property owners were still allowed to vote in bond elections—a right not typically granted to those within the city’s limited-purpose jurisdiction. Officials said these parts of town also continued to receive library, parks, and emergency response services. Services to the area have evolved over the last 33 years, Flannigan said, and although the emergency service response times needed to be improved, the property owners still needed to pay for the service they were receiving.

Flannigan said it is common for many of the Lake Austin property owners to not receive Austin Energy service or be hooked up to a non-Austin Water system—he said many people in his Northwest Austin district are in the same boat. However, property taxes, Flannigan said, mainly cover police, fire, EMS, libraries and parks—all of which the Lake Austin property owners have received.

“We’re not asking people to pay into Austin Water if they don’t use Austin Water,” Casar said. “What we’re saying is that everyone who received property tax-funded services and is a part of the city and votes in city bond elections should pay for those things.”

City staff is sending out notices to all of the Lake Austin property owners to alert them of the effort to repeal the law. Casar and Flannigan said they have not heard any objections thus far.