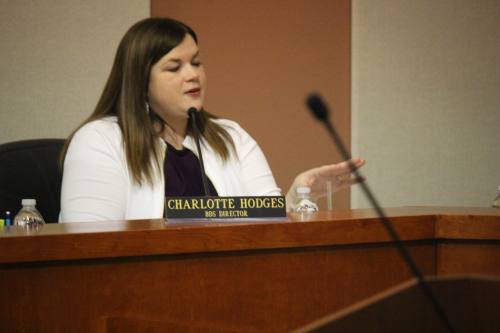 Following enthusiastic and at times heated input from residents last month regarding parking of recreational and waterborne vehicles on any public right of way or private lot, Lakeway staff took another stab at clarifying language in the city code.

During the Feb. 19 City Council meeting, Building and Development Services Director Charlotte Hodges proposed new language specifying allowable time frames and calling for recreational vehicles to be parked up to 72 consecutive hours on a private lot but not more frequently than once every 60 days, and they could be parked for two hours on public right of way or a private lot while being loaded and unloaded. The language also stated boats could be parked for up to two hours on a public right of way or private lot while being loaded or unloaded but are not given the same 72-hour allowance as RVs.

Several Lakeway residents spoke during the public comment portion of the agenda item, stating mostly that two hours is not enough time to load or unload recreational and waterborne vehicles. Residents also stated the new language was too confusing to understand how to be compliant with the code.

After making further clarifications with Lakeway’s city prosecutor to present to council, Lakeway staff, led by Hodges, removed the “two-hour” stipulation for both RVs and waterborne vehicles. Staff also left certain words in the city code blank for council to discuss during the March 18 meeting.

The open-option language presented March 18 stated the conveyances be parked for “no more than XXXX days or parts of days out of any XXXX day period.”

Though several Lakeway residents spoke during public comment on the matter, the discussion was far more subdued, with suggestions ranging from complaints about allowed time frames for loading the vehicles to requiring RVs and watercraft be kept at a separate storage facility.

Council Member Louis Mastrangelo said most people he has talked with about the city ordinance are amenable to 48 total hours of loading and unloading time per vehicle in any given seven-day period.

“I don’t think there’s any way to make everybody happy with this,” Mastrangelo said, adding that Lakeway has had ordinances governing policy on RVs and watercraft since 1997. “I got enormous amounts of emails on this on both sides of the issue.”

Council Member Laurie Higginbotham said she conducted a small poll on the social media site Nextdoor.com, and the 48-hour policy seemed to garner the most support in the poll she called non-scientific.

“I would agree with Louis [Mastrangelo] that 48 hours is probably the best policy we’re going to get,” Higginbotham said.

After discussion, council voted to approve the ordinance and change the language to read RVs and waterborne vehicles may be parked on a residential lot for no more than two days out of any seven-day period.