River Place board sets free usage times for nature trail, explores options for who must pay within community 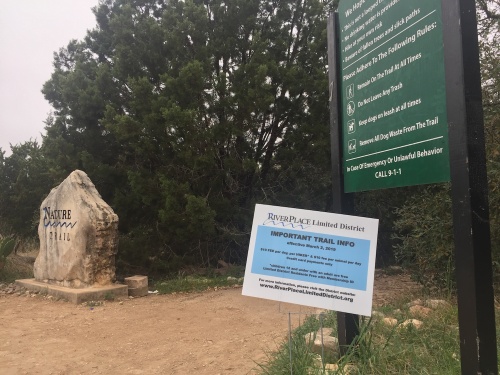 Fee implementation has not begun, but the River Place board of directors communicated the fee structure is in place, and though no fees have been collected yet, collection could begin at any time.

In the wake of a divisive decision to charge $10 per person and pet to hike the system of trails within the River Place Limited District in Northwest Austin, board members voted unanimously during a special meeting to further explore options related to the fee and who must pay it.

The River Place Limited District board of directors March 11 passed a unanimous motion to create an exploratory committee. Specifically, that committee would investigate interest and contact River Place residents paying into the homeowners association but not paying into the taxing entity regarding expansion of the limited district boundaries.

River Place residents living outside the limited district boundaries must pay the fee when applicable, while those living within the boundaries do not have to pay the fee.

The limited district, which converted from a multiple-utility district Dec. 15, 2017, according to the River Place Limited District website, established a $0.075 ad valorem tax rate per $100 of valuation for those living within the district.

Residents of River Place showed up to the March 11 meeting, with several voicing their opposition to the fee and suggesting it acts as a wedge between those within the district and those outside of it.

“We just felt very sad that we were left out,” River Place resident Rekha Nath said to the board March 11. Nath is a resident who pays the HOA dues but lives outside the limited district.

She added she felt not enough informational outreach occurred to let River Place residents know about the fee and what those living outside the limited district might expect in terms of access to subdivision amenities.

“I really hope we reach an equitable solution,” Nath said.

Fee implementation has not begun, but the board communicated the fee structure is in place. Though no fees have been collected yet, collection could begin at any time. The board has stated the reason for the fee is to help mitigate safety and traffic concerns in the area and defray the cost of the nature trails and parks within the limited district.

Robin Sullivan lives in River Place on Cortana Ridge and in February said she frequently uses the River Place trail system. The trail head she enters is about a mile walk from her house, and she said she moved to the area in October largely because of its proximity to the River Place trails. Though she still has to pay her HOA dues, she is still required to pay the new $10 fee to hike the trail.

“Basically, we’re being treated as second-class citizens of River Place,” Sullivan said. “The thing that drew us to the area is being taken away from us.”

During the special meeting, the board also voted to establish an initial time frame of free usage to the public that remains subject to change. For now, the time of free usage is Monday-Friday from 10 a.m.-2 p.m. through April 30.