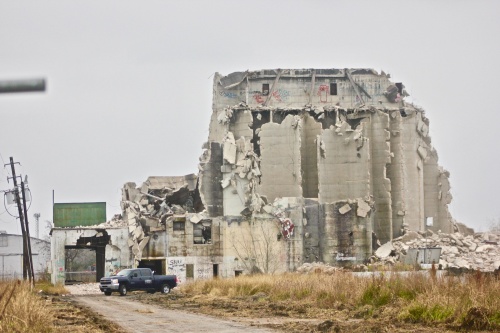 Crews with Cherry Demolition began work on Jan. 15 to tear down the silos off of Rice Drier Road in East Pearland.

The Rice Drier Road silos attracted onlookers Wednesday as crews continued work to demolish the structures, one of a few remnants of Pearland's heritage that has been long neglected.

"It looks like it's fighting it every step of the way," said Brenda Martin-Riggs, a longtime resident and vice president of the Pearland Historical Society. "They've been at it for a while, and it's not giving up just yet."

She said she came to the site as soon as she heard the demolition had started Jan. 15. She had returned Tuesday to keep watch.

The site is being cleared for a light industrial and commercial business park that will include a facility for Energy Rental Solutions, a Caterpillar generator dealership. According to the Pearland Historical Society, the structure was built in 1948 and has been dormant for the last 20 years.

"I wish we had the opportunity to dialogue with the developer about ways to save even just a small piece of the building for posterity," said Donald Hayes, an officer-elect of the historical society who is the acting chair of the citizens advisory committee for the Pearland train depot project. "I completely understand that it may not have been salvageable for development, but it would be nice to save part of the history."

The silos, once owned by American Rice, were a symbol of the region's former agricultural economy, when rice was the cash crop, Hayes said.

Videos of the demolition prompted fresh outcry on social media, but residents also acknowledged that a better use of the area could be good for the city.

"I have lived in Pearland my entire life and am sad to see them go. I can remember going there as a young kid with my dad to get rice hulls to till into the garden to help break up the gumbo," Scott M. shared with Community Impact Newspaper on Nextdoor.

"I miss the history those silos represented. It's sad to see them go," Kathy B. shared.

"I've only been in Pearland 20 years, so I don't want to step on any older Pearlanders," Priscilla Lynn Tharp wrote in a Facebook comment to Community Impact Newspaper. "But if it was abandoned and couldn't be used for anything else, then I agree with the purchase and new business park."

Hayes said he hopes the loss of one historic symbol inspires residents to step up and save another—the Pearland train depot.

"Unlike the silos, that is a site we can do something about. It's a city building on city land, with funds committed to help preserve and restore it," Hayes said.

Most of the $900,000 depot project budget is coming from the Pearland Convention and Visitor's Bureau as well as city government and the Pearland Economic Development Corporation, but a capital campaign will also need to fill the rest.

A brick paver fundraising program is getting underway, Hayes said.

"I hope we can tap into this passion that's out there for Pearland's history," he said.

Information on how to get involved with the depot restoration effort is available at www.visitpearland.com/depot.

The project is timed to coincide with the celebration of Pearland's 125th anniversary, which falls in September.