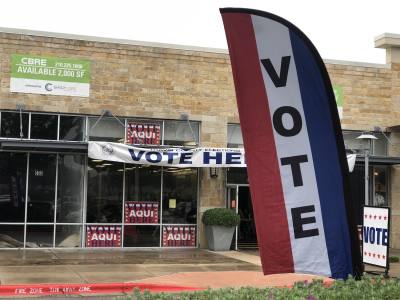 A sign welcomes voters at Southpark Meadows in South Austin on Tuesday, Nov. 6.

All seven propositions that make up the City of Austin's $925 million municipal bond have passed, according to results from early voting totals and Election Day reporting in Travis and Williamson Counties.

“Austin believes in investing in itself and its future by overwhelmingly passing the affordable housing bond and other critical items like flooding (management),” Casar said.

Ted Siff, head of the Austin Together PAC, said it is extremely fulfilling to see Austinites believe in their government and realize everyone can work together to make a better city.

“The passage of these proposals will help us do that,” he said.

Siff said whether it is buying parkland or fixing roads, voters have authorized the government to issue bonds and begin the projects.

“It is estimated to take roughly six years to do all of these projects,” he said. “But there is no time like the present to get started.”

The bond asked voters to approve a loan for projects around the city. It included the largest-ever ask for affordable housing, $250 million in Proposition A, which had 73 percent, or 212,451 of voters in support as of 10:45 p.m. Tuesday.

As of Tuesday night, the other six propositions each had margins of support greater than 50 percent:

Proposition B, $128 million for libraries, museums and cultural arts: 74 percent, or 214,174 voted yes.
This will fund needed improvements to cultural centers such as the Mexic-Arte Museum and subsidize rents for creative spaces.

Proposition C, $149 million for parks and recreation: 80 percent, or 234,615 voted yes.
This will fund the purchase of 300 acres of parkland to address park-deficient areas. Immediate fixes to many city pools, recreation centers and park infrastructure are also included.

Proposition E, $16 million for health and human services: 70 percent, or 199,059, voted yes. All of the funds would support a new Dove Springs Health Center to serve about 12,000 residents.

Proposition F, $38 million for public safety: 81 percent, or 233,342, voted yes.
Funds will go toward repairs to 16 fire stations and the renovation or expansion of six EMS stations.