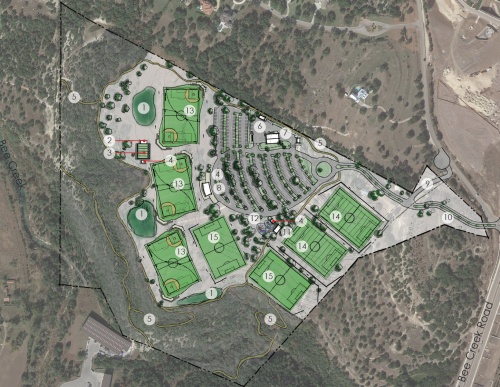 The above image shows an initial concept of the Bee Creek Sports Complex.

More than a hundred people, including a healthy contingent of kids from Lake Travis Elite Soccer and the Lake Travis Youth Association, packed into the Lakeway Activity Center Ballroom Thursday for a presentation and question-and-answer session on a large-scale sports complex coming to the area.

Travis County Parks presented a preliminary plan for the Bee Creek Sports Complex during an event that also served as an opportunity for the public to see its initial concept plan and offer input.

“Totaling $23.5 million, the Bee Creek Sports Complex is one of the largest projects in the 2017 Travis County bond program,” a Travis County Parks handout states. Funding for the project was approved by Travis County voters in November 2017, and is being completed in partnership with the City of Lakeway.

Lakeway purchased 70 acres at 4440 Bee Creek Road with a $3.7 million-plus bond voters approved in the 2014 general election. Travis County, through an interlocal agreement with the city, is leasing the property and taking on its development, operations, maintenance, and management, the handout said.

Charles Bergh, parks director for Travis County Parks, said many people are moving to the western part of the county and that a facility of this size is definitely needed.

“I wish we had more acreage for this type of a complex, but we’re making do with what we’ve got,” Bergh said.

Attendee Amber Meyer recently moved to the Lake Travis area and said she is in favor of the sports complex. A new facility should be a welcome addition to the area, she said, especially in light of the recent rains that caused cancellations of her kids’ soccer games. She said she also wanted to get a better idea of why people are opposed to the facility.

One of the largest concerns among attendees centered on lighting. Travis County Parks information states that lights will always be off by 10:30 p.m., a detail that resulted in several questions as to how necessary that time frame was.

LTYA Executive Director Scott Cronk addressed the crowd and said that late-hour lighting shouldn’t be an issue, at least not one created by the LTYA. Most soccer games are done between 8 p.m. and 9 p.m., he said, with the exception of some games that may last until 9:30 p.m.

Other concerns centered on security for the sports complex, who will be allowed to use the facility, whether alcohol use is prohibited, parking and potential traffic created by a planned roundabout on Bee Creek Road.

Final design for the facility is slated for the spring of 2019, and construction is scheduled to begin in 2020.

Plans for the completed Bee Creek Sports Complex include: