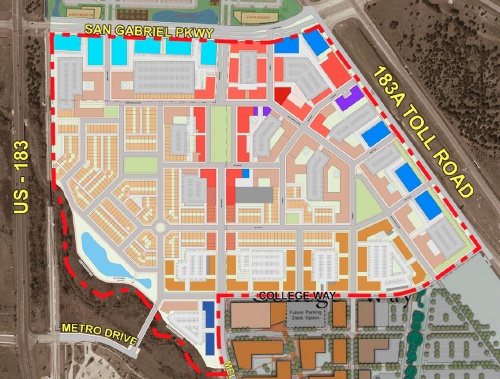 The Northline project is proposed near Toll 183A in Leander's walkable transit-oriented development district.

During a meeting last week, Leander City Council adopted additional performance standards for Northline—a proposed mixed-use project near Toll 183A—and scheduled a public hearing for residents to address the sale of bonds for the public-private partnership.

Northline’s developer, Tynberg LLC, is planning to bring an urban town center with a mix of shopping, dining and housing options into Leander’s transit-oriented development, or TOD, district.

City Council approved up to $15 million in funding in June for the creation of infrastructure in the development. The approval took place before a new mayor and two new council members took their seats in July.

During the Aug. 16 meeting, City Council added additional performance standards into the reimbursement agreement for Northline and Tynberg LLC.

Aside from the $15 million provided by the city, Tynberg LLC is also planning to allocate about $12 million for infrastructure for the project. According to city documents, Leander would reimburse the developer if Tynberg LLC applies for building permits for 100,000 square feet of commercial and non-residential uses and has at least 200 residential units within 5 years. During the Aug. 16 meeting, the city also added that Tynberg LLC would need to apply for certificates of occupancy, which indicate the project is ready for tenants to move in, for the same amount of space within 6 1/2 years.

The developer would also need to hit a milestone of 200,000 square feet of commercial or non-residential units and at least 400 residential units within 8 years. During the Aug. 16 meeting, City Council also added that Tynberg would need to apply for certificates of occupancy for the additional space within 9 1/2 years.

Per the agreement, the funds would not be reimbursed to Tynberg LLC if the developer does not meet the performance standards. Council approved the additional standards at a vote of 6-1, with Mayor Troy Hill voting against.

“I want this project to work, so between now and then I really want to dive into the numbers,” Hill said after the vote.

The city plans to fund the $15 million in infrastructure for the Northline project with certificates of obligation, which are bonds that do not need approval from voters. During the meeting, City Council also issued notice of a public hearing on Oct. 4 regarding issuing $25 million in certificate of obligation bonds.

“The public has an opportunity to comment on that proposed debt sale,” Leander Finance Director Robert Powers said.

Of that amount, $6.41 million would be allocated for equipping and constructing Fire Station No. 5 near the Travisso neighborhood and $15 million for infrastructure improvements for Northline. Though the two projects total about $21 million, Powers recommended the maximum notice limit be $25 million.

City Council approved the item at a vote of 5-2, with Hill and Council Member Marci Canon voting against the measure.