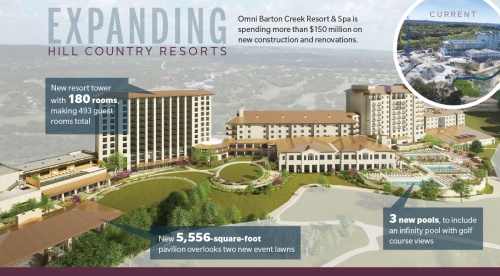 A rendering of the expanded Omni Barton Creek Resort & Spa

The growth of the Lake Travis-Westlake area is evident in the form of road construction and new housing developments—but signs of economic growth are also showing in expansions and renovations of nearby resorts.

Staff at Omni Barton Creek Resort & Spa believe theirs is one of few urban based destination resorts in the country.

“To have Austin 20 minutes away but be able to retreat back to this beautiful destination resort is one of the things we think sets us apart,” said David Jurcak, managing director of Omni Barton Creek Resort & Spa.

Omni is confident there will be continued and growing interest in the Barton Creek location, Jurcak said, so much so that it is spending more than $150 million and closing the resort portion for a full year to complete a major renovation and expansion.

The process began with the demolition of several buildings in November with the intention of leveling the ground to build anew.

“That was about two months’ worth of work,” Jurcak said. “Now [at the end of March] we’ve been excavating and putting infrastructure in place to start coming out of the ground.”

Omni staff realized Barton Creek resort guests—and anyone visiting the Hill Country—wanted to spend ample time outside, so they focused much of their renovation on creating outdoor spaces, something the resort did not previously have, Jurcak said.

Along with the outdoor meeting spaces and event lawns, decks, patios and porches will come off of the new buildings, and bedrooms will have floor-to-ceiling windows.

“When you walk in right now [pre-renovation], you can’t tell what’s in the backyard,” Jurcak said of the resort lobby, which consists of many small spaces. “With the new arrival experience, you’ll enter into wide-open space and see all the way to the back window and the view.”

The renovated lobby will also contain an expanded bar and a coffee shop with seating.

Views were also taken into consideration for the design of three new swimming pools. The elevation of the pool decks will vary to ensure no matter which pool a guest is swimming in, he or she can see the surrounding hills. One will be an infinity pool that overlooks the golf course.

Though the original club was closed in mid-February for renovations, the new Clubhouse at Canyons opened March 12 and caters to golfers.

The country club will remain open throughout the yearlong resort closure.


Why a massive renovation now?

Omni purchased the Barton Creek resort in July 2013. It was always the owner’s intention to revamp the property, Jurcak said.

Originally starting as a country club in the mid-1980s, the resort opened Sept. 5, 1987, with Lady Bird Johnson in attendance for the grand opening ceremony. Over the following years, four championship golf courses were introduced–one designed by Austin native Ben Crenshaw, one by Arnold Palmer and two by Tom Fazio.

Jurcak said apart from golf course renovations at Canyons, the grand reopening is scheduled for May 2019.

Barton Creek Resort is in Austin’s extraterritorial jurisdiction, so neither the city of Austin nor a nearby city collects hotel occupancy taxes from the site. However, area residents could still benefit from the renovation, said Cathy Hoover, West Lake Hills Chamber of Commerce executive director.

This year the chamber held an event at a nearby hotel where it quickly reached capacity and organizers had to cap the guest list, Hoover said, adding they have to rent space in downtown Austin whenever they want to have bigger events. She said the new meeting and event spaces at Barton Creek will allow the chamber and other organizations to keep events closer to home.

While there are several great family-friendly restaurants in West Lake Hills, there are not many upscale options, Hoover added.

“I’m thrilled to hear about so many new dining options right here,” she said. “I’m also excited about the ballroom. It’s going to be a wonderful resource.”

Lakeway Resort and Spa, which does contribute financially to the city of Lakeway via a municipal hotel occupancy tax, is also doing a renovation.

The Sunset Room, a private banquet space that overlooks Lake Travis, is becoming outdated and was marked as a 2018 renovation project, said Alex Folden, conference and catering
coordinator.

The plan is to put in new carpet, new paint and remove the built-in bar and use rolling bars for events in the future.

The update will open up more potential for bigger groups than what it currently holds, taking the number from 90 to about 120, Folden said.

“Omni is shutting their doors to do one big renovation, but we go piece by piece,” Folden said.

The three buildings on site were built in 20-year increments, starting with Lakeway Inn in the 1960s, Folden said, adding that renovations like the ballroom are always in the works in order to keep the resort modern.

“There wasn’t much in the area when it was created [in the 1960s],” she said. “The Lakeway community was built around the resort. It really kicked off the urbanization of this area.”

Now the resort has three buildings—the Main Lodge with six floors of sleeping rooms; Vistas, which contains a large glass ballroom; and the Travis building, which has a restaurant and the ballroom receiving the renovation.

Lakeway Resort’s restaurant and event spaces are also open to the public, and members can use the pools.

Remington Hotels purchased the resort about three years ago and has been making updates ever since, according to Folden.

“We’re going for more of a rustic, lakeside-lodge feel,” she said. “The Main Lodge and Vistas are pretty up-to-date, modern and trendy—those are the areas attractive to brides. The Travis building [the original Lakeway Inn] has an older feel, and they weren’t doing a lot of weddings when it was just the Lakeway Inn—so that’s where our next projects are happening.”