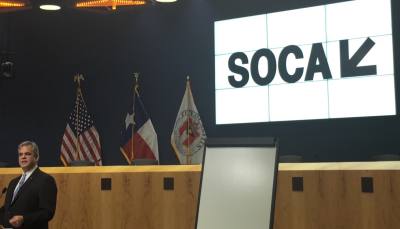 Austin Mayor Steve Adler made his annual State of the City address Tuesday.

Austin added 30,000 jobs last year, has the country’s second-lowest unemployment rate, remains the safest big city in Texas, the best place to start a small business and the best place to live in America, Austin Mayor Steve Adler said Tuesday in his State of the City address.

“In Austin, we should never measure our progress by how well we are doing compared to other cities,” Adler said. “We can only say the state of our city is strong if we are affirmatively building a future in which we preserve the spirit and soul of Austin.”

Tuesday’s annual event brought together elected officials, members and executives from several city departments, police and fire chiefs, community stakeholders and residents from across the city, a crowd to which Adler was introduced by Mexican Consul General Carlos Gonzalez Gutierrez.

“Many wonder what the future holds for our great city, so let me say this clearly: Austin can, must and will lead in this new century,” Adler said. “The complexities and connections of today's world have yielded a new Austin moment, a moment when our global leadership is essential, even if we must often lead in new ways.”

Here are some highlights from Tuesday’s State of the City Address:

Adler kicked off the speech by calling traffic one of the “top challenges” facing Austin.

Adler said soon people will drive down Loop 360 without hitting a traffic light, and corridor improvements include 75 miles of connected sidewalks and paths, 40 miles of bike lanes and 100 miles of bicycle route connections.

Adler said the city’s work on affordability would not be finished as long as the city’s economy continues its growth. However, he said rents are beginning to level off, which means an affordability improvement for more than half of the city’s residents. Adler said some of this was attributed to increased rental housing supply.

Since the 10-1 City Council took office in 2015, the city has increased spending from the Affordable Housing Trust Fund by 530 percent and has incentivized or subsidized the construction of more than 2,000 income-restricted, affordable units—with more than 6,300 more units on the way—Adler said.

Adler said permitting improvements have made it cheaper for homeowners to renovate, and all residents can expect water bill cuts this year.

Adler blamed unfair property taxes collected through the state’s "Robin Hood" school funding system for added economic pressure on Austinites. Adler pulled out a chart that showed the amount of taxes taken by the state for schools outside of Austin has increased 288 percent, and, next year, the average resident will send $1,378 to the state and only $1,250 to the city.

“It’s important to realize that this year, the state of Texas will take more of your local property taxes than the city of Austin,” Adler said. “It is high time the state legislature finally does something about increases in property taxes.”

Adler emphasized the importance of passing CodeNEXT, the city's rewrite of the land development code, as crucial to overhauling the status quo which has created skyrocketing land prices and residents getting priced out of the city.

“The long-term economic boom we’re enjoying here is not colorblind,” Adler told the crowd. “Unemployment in black and Hispanic households is way too high.”

Adler said the life expectancy in west Austin is ten years longer than east Austin. Although the inequity was “inherited,” Adler said work needs to continue so the inequity is not handed down to future generations.

Adler said 60 of the 247 recommendations from the Mayor’s Institutional Racism & Systemic Inequities Task Force have already been implemented and 96 are “underway or planned.”

“We should commit to housing the homeless,” Adler said. “Our goal should be finding homes for all the homeless, as we find them.”

The mayor cited successes in addressing the downtown drug crisis, assisting homeless youth and working toward the goal of 400 new permanent supportive housing units at the end of 2018.

Adler said should his Downtown Puzzle work out—which hangs on the results of a University of Texas feasibility study on the Austin Convention Center expansion, expected to be finished by fall—the city can capture $10 million per year to invest in the downtown homeless shelter.
SHARE THIS STORY

WEIGH IN: We want to hear from parents heading into the 2021-22 school year