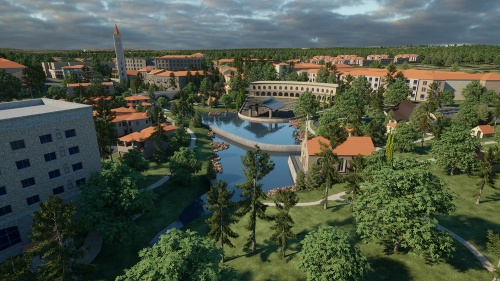 Two projects from separate developers that differ in size and vision should bring major changes to one of Georgetown’s central business corridors near the intersection of Hwy. 29 and I-35, according to city leaders.

“As the city grows, we have to continue to have more options,” Ross said.

A 2016 analysis of Georgetown-area commerce found the city could support more than 1 million additional square feet of retail space than what is available today. The analysis, completed for the city by Catalyst Commercial, also showed that a lack of space means Georgetown is losing retail dollars to surrounding communities.

Along with growth on Hwy. 29, Georgetown is seeing new development in other parts of the city as well.

Planned to include up to 4 million square feet of commercial and residential space, Wolf Lakes Village is by far the larger of the two future projects.

The development’s 164-acre property is across Hwy. 29 from the Wolf Ranch Town Center.

Future tenants have not been announced, but Wolf Lakes Village will include a mix of commercial and residential development, said Iva Wolf McLachlan, who serves as president for Wolf Lakes LP. The project will be built with an Italian-village motif with design elements including stone buildings and streets, a central plaza, three lakes and arched bridges, she said.

"The whole project will be timeless," McLachlan said. "It will incorporate designs and structures and best practices of ancient villages that have stood the test of time and never really go out of style. … We're looking at building a village that's going to last through the next century."

The self-contained village style, with homes, shops, restaurants and offices all on one site, should make the development an attractive location for corporate campuses, McLachlan said.

She said she expects the first phase of the development will break ground at some point in 2018. Wolf Lakes LP will first need to ask Georgetown City Council for approval to rezone the property into a planned unit development.

Once construction starts on the first phase, it would probably be about one year until completion and opening of the first structure on the property, McLachlan said. Full build-out on the development will likely take about 10 years.

Michaela Dollar, economic development director for the city of Georgetown, said Wolf Lakes Village represents the legacy of the Wolf family, who have played a significant role in developing retail and mixed-use projects along Hwy. 29. Wolf Lakes Village is also a project unlike any other in the city’s history, Dollar added.

McLachlan said the site’s topography, as well as its location near the Wolf Ranch Town Center and the Wolf Ranch master-planned residential communities, make proximity to the Hwy. 29 and I-35 intersection an ideal location for large-scale development.

Walkability for future residents and employees at Wolf Lakes Village will be a significant component to the project, as will the 10 percent of the development site that will be dedicated to parkland, McLachlan said.

"The whole convergence of all those elements makes [the site] one of the best locations in the country," McLachlan said. "We're just completely in the growth corridor with the expansion of Austin, and one of our primary objectives is to make this a job-creation site."

Across I-35 to the southeast, CSW Development sees its Wolf Crossing project located in the perfect spot to take advantage of easy access as well as a unique setting bordering the San Gabriel River that will allow tenants to be creative with their spaces and amenities.

“We envision Wolf Crossing being more than just a place where people shop,” said Todd Wallace, the company’s CEO. “We want this to be an
experience.”

Additional tenants will be announced once plans are finalized, said Jon Switzer, vice president for brokerage at JLL, which is handling business leasing at Wolf Crossing.

Wallace said he anticipates construction on Wolf Crossing will begin by May with the first businesses in the development opening by mid-2019.

“We have been incredibly surprised and excited about the amount of interest that we have had from different users, and although we haven’t yet put all the pieces of the puzzle together on who’s going to be there, we have got some exciting groups we’re talking to,” Wallace said.

Dollar said Wolf Crossing, in particular, will help give Georgetown “much needed immediate retail availability” when the first shops and restaurants open in the development in 2019.

Catalyst Commercial’s 2016 analysis looked at the Georgetown’s “retail leakage,” or the money that leaves the city due to unmet demand for more retail space, and found about two-thirds of Georgetown residents’ money is spent in the city, meaning about one-third is spent outside the city limits.

Projects are planned or underway in other parts of Georgetown as well.

Holt Cat, the San Antonio-based retailer of Caterpillar equipment and engines, broke ground in January on its future 85,000-square-foot sales and rental facility off Airport Road near the Georgetown Municipal Airport. Construction is expected to finish by mid-2019, said Peter Holt, the company’s CEO and general manager.

Georgetown will likely see additional development in the area near the Holt Cat facility, located close to the intersection of Lakeway Drive and I-35, City Manager David Morgan said.

The city is planning to expand Airport into a five-lane roadway between Lakeway and Aviation drives, in part to accommodate for the anticipated future development in the area.

As part of an economic incentive deal approved by Georgetown City Council in January 2017, the city will provide a $185,000 grant to connect a future wastewater line extension to the future retail facility's property. The extension will serve nearby commercial development, as well, according to the city.

On the south end of town, Novak Bros., the developer behind the Summit at Rivery Park, plans a 72-acre mixed-use development called Summit at Westinghouse on land east of I-35 and south of Westinghouse Road. City Council approved a planned unit development rezoning request for the project in January.

Dollar said adding retail and commercial development can pay dividends for Georgetown in the long term as the city tries to attract more large employers.

“Companies look for amenities for their employees [such as] places for them to have lunch, pick up their dry cleaning or grab a drink after work,” Dollar said. “With us having this element of commercial growth, it will really pave the way for future growth in our other industry sectors.”