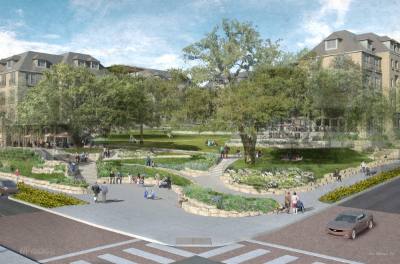 The developers of the Lindsey Hill project have revamped their proposal to include condominiums. The project originally came before San Marcos Planning and Zoning Commission in April 2016, and commissioners denied recommendation of the plan.

A controversial mixed-use project that failed to get the approval of San Marcos planning commissioners and several residents is back in a new form.

The developers of the Lindsey Hill project, Mark Berins and David Lerman of Arqeo, have revamped their plan to bring parkland as well as residential and commercial buildings to two square blocks of space located between the Lindsey-Rogers Historic District and downtown San Marcos, incorporating what they say was feedback from residents to change key aspects of the development.

The two main changes to the project—detailed on a newly redesigned website—include scrapping the 120-room boutique luxury hotel and replacing it with condominiums, as well as reducing the amount of retail space available. Lerman said these changes were made based on resident comments over several months.

"The single greatest category of objection was to the hotel," he said.

The website, which Lerman said he hopes readers will take time to read, also includes a Q&A as well as extensive information about the site itself, potential building designs and concerns regarding the environment, drainage, traffic and density. Conceptual drawings, which were not presented the first time around, are also on the website.

"We never really had an opportunity to present our project to the community," Lerman said as an explanation for the detailed website.

On April 12, 2016, when planning commissioners voted against recommending the project to City Council, Lerman said he and his business partner had 10 minutes allotted to present their plans.

That lengthy meeting—which resulted in a 7-2 vote for a recommendation of denial—brought more than an hour of public testimony, much of which was against the proposal.

Lerman said many community members who spoke out against the project had misinformation.

He said rather than move forward with the recommendation of denial from the planning commission to council, he and Berins went back to the drawing board and reached out to residents both for against the project in the last few months before launching the new website.

"We thought the best response to that was to provide a lot of information and in a way that is more easily accessible to the casual reader," he said.

Addressing concerns
The front page of the Lindsey Hill project website emphasizes in bold letters that no student housing will be included in the project; another entire section of the website is called "What's to prevent Lindsey Hill from turning into student housing?"

A fear felt by many residents when the project first came to their attention in 2016, the developers say they have assayed concerns about student housing by making no units available for rent by the bedroom. Additionally, the named tenant would have to occupy the lease and subleasing would not be permitted.

The website calls Lindsey Hill a "mixed-use urban village," complete with a publicly-available park, apartments for sale and for rent to a demographic of early career professionals to seniors, and retail and dining space with a possibility for office space "under special circumstances."

Retail space has been substantially reduced after speaking with community members, according to the website.

Residential units would include a mix of one, two and three-bedroom apartments.

The project would sit on the site of the former San Marcos CISD Phoenix and Rebound schools, bounded by Burleson Street, Hutchison Street, Moore Street and Blanco Street and surrounded by Heritage trees, something the developers have said they will preserve.

Developers paid particular attention to the area across Burleson and at the intersection of Blanco and Burleson, where single-family homes sit. The website says that area will have "existing light conditions preserved," with a substantially improved visual environment consisting of a "fresh facade with live plant elements and a new row of apartment residences that harmonizes with and enhances the residential aspects of the neighborhood."

Developers have said they will also incorporate building designs that mesh with the surrounding neighborhood.

The website addresses several other concerns by going over some of the characteristics of the development laid out in the original plan, including parking (a parking garage will be added), traffic (a traffic impact analysis showed the expected additional traffic "can be absorbed comfortably with almost no changes to existing conditions"), flooding ("Lindsey Hill will not add or create a flooding problem," the website said) and the size of the project.

Developers are going with a "design up, not out" concept where buildings range from two-and-a-half stories to five stories. They say this concept showcases the site's natural features and make the parking garage invisible by wrapping buildings around it. The residential and commercial project will be built on 60 percent of the site, leaving the other 40 percent intact.

What's next
Lerman said he plans to meet with city planners in January to begin updating the Planned Development District, or PDD, proposal, which allows developers to build on larger tracts of land and have uses, regulations and other requirements that vary from the provisions of other zoning districts.

According to Planning Manager Abby Gillfillan, since the zoning permit is still considered active, the potential passage of Code SMTX—the city's new land development code that comes with a series of proposed new zoning districts—in the spring will not affect the Lindsey Hill project.

Once city staff and the developers have amended the PDD, the project will go to the Planning and Zoning Commission for a recommendation.

Lerman said he and Barins will continue to hold stakeholder meetings in the meantime.

"I feel much more optimistic," Lerman said. "A lot of things here are different now, which we hope will result in a different reaction from the community."

The original PDD can be found in the April 12, 2016 Planning and Zoning Commission agenda packet.

The property is currently zoned as a public district, which would allow a variety of uses including bed and breakfasts, farmers markets, sorority and fraternity houses and duplexes. The developer would only need to obtain building permits in order to proceed with those uses.

Multifamily housing is also allowable in public districts, but would require the Planning and Zoning Commission to approve a conditional use permit.
SHARE THIS STORY