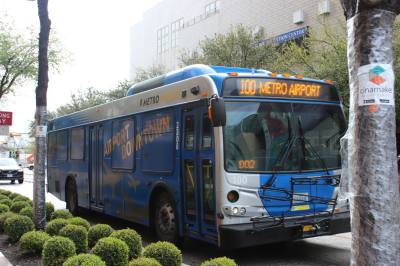 Route 100 MetroAirport is one of 13 routes that would be eliminated in June but replaced with other service.

Capital Metro’s board of directors approved Nov. 15 its largest system overhaul, affecting more than half of its 82 bus routes starting next June.

The June service changes—which came over as part of the transit agency's Connections 2025 plan approved in February—include increasing bus frequency to every 15 minutes on 10 routes, modifying 20 routes, eliminating 13 routes and adding 10 new routes.

The vote was not unanimous, however, as two board members representing East Austin—Delia Garza, District 2 Austin City Council Member, and Jeff Travillion, Travis County Precinct 1 commissioner—voted against the plan.

“I’ve gone from yes to no several times in the last 24 hours,” Garza said. “I think this is good for the system, but it’s very difficult for me to vote yes on this when I felt there were flaws in the public input process.”

Travillion said he was concerned about how the plan will affect residents displaced from the core of Austin who will no longer have access to service.

Many residents who attended the Nov. 15 board meeting said changes would negatively affect residents who do not have any other means of transportation.

“Riders will feel more valued because they don’t have to plan their day around a bus that comes every 40 minutes or hour,” said Jennifer McPhail, who is a representative of Adapt of Texas, an advocacy group for residents with disabilities.

Capital Metro still plans to have outreach opportunities to let the community know about the approved route changes. This will now include meeting with residents in areas where bus service will be eliminated, including along Exposition Boulevard and in East Austin.

Under the original proposal, 36 riders of MetroAccess, the agency’s paratransit service, would lose service because they would no longer live within 3/4 of a mile of Capital Metro’s fixed route service. The board also approved an amendment to the changes that would grandfather in these riders, and staffers will analyze MetroAccess use, ridership, alternatives and costs to offering different service. It would cost between $200,000 and $300,000 to retain service.

“I just don’t think [eliminating their service] is appropriate as a policy matter I think we need to continue their service,” said Austin City Council Member Ann Kitchen, who proposed the amendment.