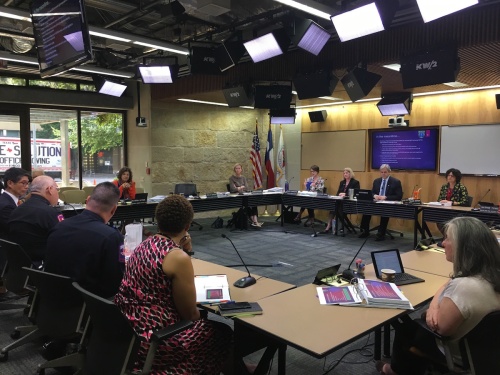 The city of Austin is mulling the feasibility of merging its fire and emergency medical services departments, according to a discussion during Wednesday morning’s fiscal year 2017-18 budget work session.

According to a budget discussion held at last week’s City Council meeting, Austin is one of the only cities in Texas that operates under a third-service model. During Wednesday’s work session, the Austin City Council discussed other EMS models that could trim its $84.2 million cost. Among those models was the merging the service with its fire department.

“It would not be the best or most robust type of service we could have,” Rodriguez said.

Austin Fire Chief Rhoda Mae Kerr said there are examples of efficient models of EMS and fire department mergers. She recommended the city hire a free consultant from the International Association of Firefighters to look into the efficiency of both models.

District 2 Council Member Delia Garza, a former city firefighter, focused her argument on the necessity of having the two departments operate separately, but District 6 Council Member Jimmy Flannigan supported a closer look at what a merger would look like. Flannigan said only 0.75 percent of the fire department calls were structure fires, and roughly two-thirds of the calls were strictly medical-related.

Mayor Steve Adler said he did not have enough information to intelligently put his support behind any model and asked to see a five-year plan for the departments. Other council members agreed that more data would be needed before deciding on a merger.