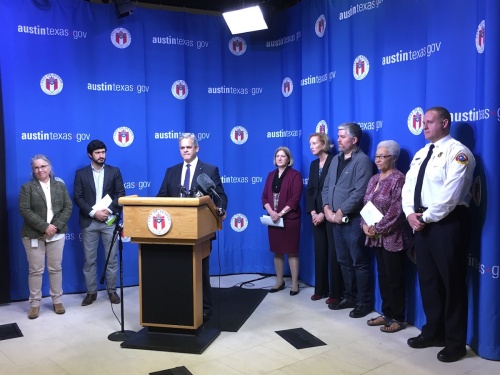 Joined by council members and city officials, Mayor Steve Adler announced the release of CodeNEXT's first draft at a press conference on Monday.

Only a text version of CodeNEXT was provided for Monday’s initial release, but it was the first tangible look at the proposed land development code rewrite. An accompanying map is expected to be released April 18 that will provide a visual component to Monday’s revealed text. You can find a copy of the text here.

“I don’t think there is anything we will do this year as a city that is going to be more important than the rewrite of the land development code,” Mayor Steve Adler said. “This is the document that describes how we look as a city, how we function as a city, how we build as a city.”

On Wednesday, the city will hold an official draft release event, scheduled for 4-6 p.m. at the Palmer Events Center, 900 Barton Springs Road. The open-house event will offer an up-close view of the proposed code, as attendees will be able to take a guided walkthrough that explains how the new code contrast with the existing development rules. A Code Advisory Group meeting will immediately follow the event at 6:30 p.m.


“I don’t think there is anything we will do this year as a city that is going to be more important than the rewrite of the land development code." — Austin Mayor Steve Adler

According to Adler, the text released Monday is a roughly 1,100-page document–not much slimmer than its 1,300-page predecessor. The code aims to balance what Adler referred to as the “Austin bargain," an attempt at protecting the character of the city’s existing neighborhoods while allowing density along the city’s main corridors.

The preliminary draft is the first step in what is expected to be a 14-month process of intense scrutiny and revisions as the public and city continue to work together in shaping Austin’s physical future.

Over the next 14 months, the code will go through a series of handoffs that Adler likened to a relay race. Here's how that race is scheduled so far:

• On Monday, the baton was handed from city staff and the code’s consultants from Opticos to the CAG, a diverse group of 15 officials who deal directly with public input. The CAG will host a variety of public meetings–both general and district-specific–to allow the citizenry to comment, critique and provide input.

• In June, the CAG will draft up a report of recommendations and hand the baton off to the Planning Commission and Zoning and Platting Commission, which will take three months to review the draft, apply its knowledge of city development and land use to make revisions, and by December hand off the changes to Austin City Council, which hopes to approve the new code on first reading by the end of 2017, with a full adoption expected in the first quarter of 2018.

“To the community, I want to say we are all in this together, there are no sides now in this discussion,” Adler said. “The future of this city depends on the work, collectively, that we will do over the next year on this document.”

During Monday’s press conference, Adler said he saw Austin on a trajectory of becoming a city like San Francisco, where rapid growth and lack of focus on affordability led the city to see an average home cost $1.1 million. He said CodeNEXT was an important step in managing the growth rather than allowing the growth to manage the city.

“There is not another city that we can point to that has gone through this kind of growth in a way that has enabled them to not follow [the path of San Francisco],” Adler said. “I think Austin is going to be the city that shows how that’s done and frankly, there are a lot of cities in the world right now that are watching Austin.”

Work on CodeNEXT began shortly after the city adopted its 30-year comprehensive plan called Imagine Austin. The long-term vision mapped out a plan to manage Austin’s growth in a way that would maintain its goals of sustainability, social equity and economic opportunity.

The city’s existing land development code has not been subject to major revisions since the mid-1980s and was strangled in decades of contradictive revisions and overlays.