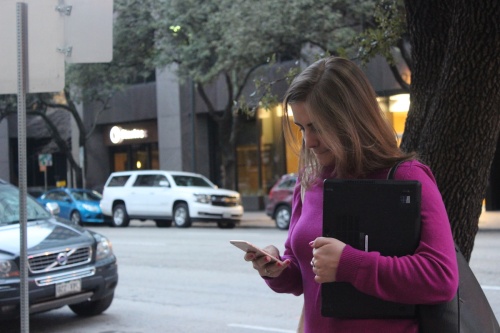 Austin resident Kate Hrdina scans downtown Austin on her phone for available ride-hailing options. Eight companies operate in the city after Uber and Lyft voluntarily left in May.

Ahead of a benchmark that requires nearly all ride-hailing trips to be completed by fingerprinted drivers, more than 8,000 drivers have completed fingerprint-based background checks, according to a Jan. 24 Austin Transportation Department memo.

Austin's eight transportation network companies, or TNCs, have until Feb. 1 to reach 99 percent compliance with the city ordinance that mandates fingerprint-based background checks to drive for a TNC. The benchmarks have been phased in since May 1, when 25 percent of trips—either by hours or miles driven—were required to be completed by fingerprinted drivers. By Aug. 1, the benchmark was raised to 50 percent and then 85 percent Dec. 1.

The city is without the two largest national ride-hailing platforms. Uber and Lyft voluntarily ceased operations in the city after the failure of a May ballot proposition to loosen the city's regulations, specifically its fingerprinting mandate.

Following the May vote, several smaller ride-hailing companies entered the fray in Austin. The following are the eight companies operating in the city and their level of compliance with the ordinance:

Here are some other statistics and takeaways from the memo: