Speeds may soon be reduced along major Round Rock corridor 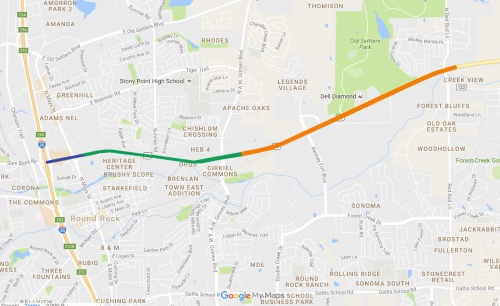 Changes may be coming to Hwy 79.

Drivers may soon be hitting the brakes when driving through Round Rock if proposed speed zone changes from the Texas Department of Transportation are approved for Hwy. 79, also known as Palm Valley Boulevard.

The focus of the proposed changes are for a congested 5-mile stretch of Hwy. 79 from I-35 to just east of Red Bud Lane. While changes have been proposed throughout the designated length of road, drivers may notice only small differences to the majority of the affected area. From I-35 to just east of Mays Street, the speed limit will remain 35 mph, with some adjustments being made where the zone currently ends. A 45 mph zone will stretch from where the 35 mph zone ends east of Mays Street to just east of the intersection at A.W. Grimes. While similar to the current zoning, the segment of road in front of the HEB Plus! shopping center both east and westbound would see the most change, as it is currently a 55 mph speed zone.

Drivers will see the biggest change from just east of the Hwy. 79 and A.W. Grimes intersection going east past Red Bud Lane, as this section, which is currently zoned as a 60 mph zone, will be reduced to 55 mph.

TxDOT made the decision to change the speed zones after conducting an engineering and traffic study on July 10, 2015.

“Speed limits are set via engineering studies to determine the proper safe and reasonable limits under ideal conditions. So, technically, speed limits are set by drivers,” said Kelli Reyna, Public Information Officer for TxDOT. “After performing a speed study, our traffic team found that some speed limits along US 79 needed to be adjusted.”

While the council is making a decision on the proposed speed zone changes, it is important to note that TxDOTs presentation of the changes to the city for consideration is, for the most part, a courtesy. Hwy. 79 is a U.S. highway, which is regulated by TxDOT. While a city has the right to disagree with changes proposed by TxDOT, the city does not hold jurisdiction over the road. Laws governing the road allow TxDOT to present an opposed case to its Traffic Operations Division (TRF) for review, where a minute order can be issued to have the zoning changed should the administrative agency decide in favor of the changes.
SHARE THIS STORY