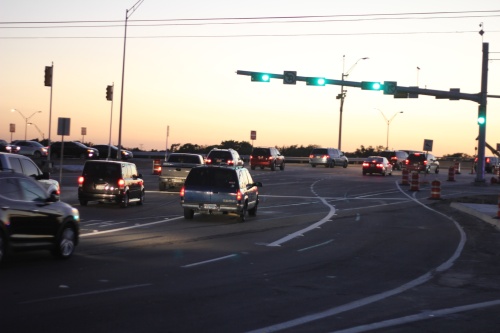 Officials with the Texas Department of Transportation, city of Round Rock and Williamson County gathered May 16 for a ribbon cutting ceremony marking the completion of Round Rock’s diverging diamond intersection.

The interchange at I-35 and University Boulevard to the east, and FM 1431 to the west, opened to traffic in November 2015 and has undergone continued improvements since that time.

Kelli Reyna, a public information officer for TxDOT, said some drivers were confused about the correct way to drive through the intersection when it first opened, but improvements since the opening will make the exchange clearer for drivers to use. City, county and state officials held a ribbon cutting ceremony marking the completion of work on Round Rock's diverging diamond interchange along the I-35 corridor at University Blvd. and FM 1431.[/caption]

“The reason why today is so important is not only because of the results we’ve seen since November—when drivers had been moved to this new configuration—but today we’re done with the paving operations, we’re done with the striping, and so now it is truly easier for people to see where they need to be going,” Reyna said. “It’s easier now to detect which lane you need to be in, and that was the goal throughout all of this.”

Terry McCoy, an engineer for TxDOT’s Austin district, said the completion of the DDI has led to significant benefits for drivers.

“This is an exciting day in Round Rock, Texas. We finished paving operations and reached full completion on this $6.6 million diverging diamond intersection project," McCoy said. “Despite a 45 percent increase in traffic volume at this intersection over the last four years, it’s already yielding a 13 percent reduction in the morning peak, and a 44 to 58 percent decrease in afternoon travel times. This means even though a lot more cars are moving through this area, they’re getting through much quicker than before.”

Mayor Alan McGraw said he was grateful for support the city received in helping to relieve the area’s traffic problems.

“I think traffic is the number one threat to this region, and it’s very important we work together to come up with innovative strategies to solve our traffic problems. The DDI is definitely an innovative solution to traffic problems, and it really does work,” McGraw said. “We’d never be able to do this without these partnerships—the collaboration between Williamson County, the city of Round Rock, TxDOT, and other partners we work with to solve some of these problems.”