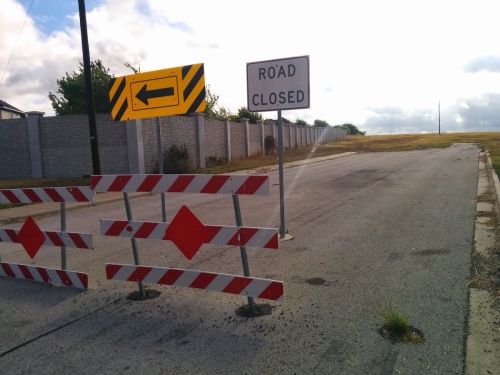 The cities of Round Rock and Pflugerville are looking to connect SH 45 N from Donell Drive to Heatherwilde Boulevard.

The cities of Round Rock and Pflugerville are looking to connect the SH 45 N frontage road from Heatherwilde Boulevard to Donnell Drive.[/caption]

The cities of Round Rock and Pflugerville are moving forward with plans to connect the SH 45 N frontage road from Heatherwilde Boulevard in Pflugerville westward to Donnell Drive in Round Rock, Round Rock Transportation Director Gary Hudder said at a Feb. 11 City Council meeting.

Hudder said the cities received verbal confirmation from the Texas Department of Transportation to move forward with the project. He said they expect to receive written confirmation soon.

The council approved $500,000 in Type B funds to go toward designing the project at the Feb. 11 meeting. Hudder said the funds will be used for engineering work for the project.

"We're not sure when construction will take place, it's a very early step in our lengthy process," he said.

The SH 45 N project funding was part of an amendment funding $18,399,086 of new projects from previously unallocated Type B transportation funds approved at the Feb. 11 meeting. The Type B fund is funded by a half cent sales tax.

Among the projects to receive funding Feb. 11 was the Southwest Downtown Phase 5B project, which will be an extension of the work currently under construction in downtown Round Rock.

Hudder said 5B was the "remaining last piece" of the project around the Blair Street and Bagdad Avenue area. He said city officials originally intended to delay the project, but they were successful in securing funding from the Capital Area Metropolitan Planning Organization for pedestrian facilities. He said those funds have a sunset clause, so officials moved the project forward a and expect to start construction by the summer.
SHARE THIS STORY