City of Round Rock to fund improvements to Dell Diamond 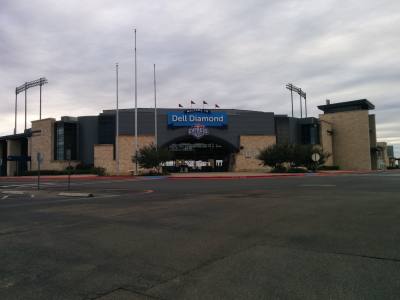 The Dell Diamond is owned by the city of Round Rock and home to the Round Rock Express.

Round Rock City Council approved repairs to the Dell Diamond Nov. 12 as part of a five-year plan for maintaining the stadium.

According to the plan, the facility will receive $1 million worth of improvements in the 2015-16 baseball off-season, including seal coating and re-striping the parking lot to prevent deterioration, converting parking lot lights to LEDs and installing a new sound system.

Tim Jackson, community relations manager with the Round Rock Express, said Nov. 10 at a council workshop that the current sound system is original, and its volume levels can be erratic.

"[The sound levels are] reasonable, then spike, then go back down," Jackson said. "Twenty percent of our speakers are dead. That's the state of our sound system at the moment."

The funds for the improvements will come out of the city's Hotel Occupancy Tax funds. The city of Round Rock owns the Dell Diamond and leases it to Ryan-Sanders Baseball, owner of the Round Rock Express.

"We’ve been through 16 seasons with this facility and have invested a lot in it, but they have done more," Morgan said.
SHARE THIS STORY