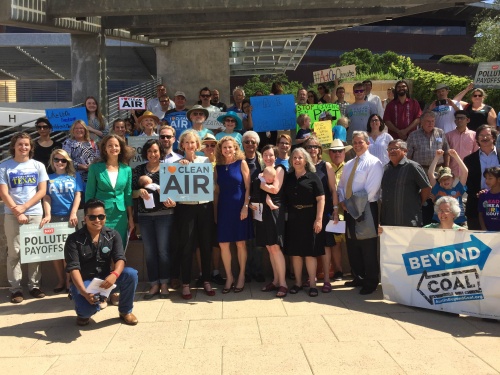 "While the time for action on climate and carbon pollution was long ago, I applaud President Obama and the EPA for making history by bringing forward the Clean Power Plan to put common sense limits on carbon pollution from power plants," Adler said.

Adler and Austin Energy General Manager Larry Weis said they hope the city receives national recognition for the work it has done to use more clean energy and reduce its carbon footprint.

Key elements of the Clean Power Plan require a 32 percent reduction in carbon pollution from power plants' 2005 levels by 2030 and encourage more use of renewable energy resources such as solar and wind.

"We will continue to monitor the impacts of these rules, the impacts on Austin ratepayers [and] balancing our need to serve customers and to protect the environment," Adler said. "We've signed contracts for solar power that will ultimately lower electric bills...our economy is growing as a result of the policies that we have [created]."

District 4 Council Member Greg Casar said attacks of the Clean Power Plan are short-sighted and the plan will not detrimentally damage the working class. Instead, a move to renewable energy could provide jobs in that field for employees who may lose power plant jobs, he said.

"You can already read in the paper all sorts of talk about how this is [going to] massively destroy jobs and send poverty rates out the roof and do damage to low income communities," Casar said. "Often times you're going to hear those critiques from folks that wanted to cut unemployment insurance or were against the Affordable Care Act, and I really wish they cared about low income people just as much back then."

Council members Delia Garza of District 2, Pio Renteria of District 3, Ann Kitchen of District 5 and Leslie Pool of District 7 all spoke in support of the plan during the August 5 press conference.