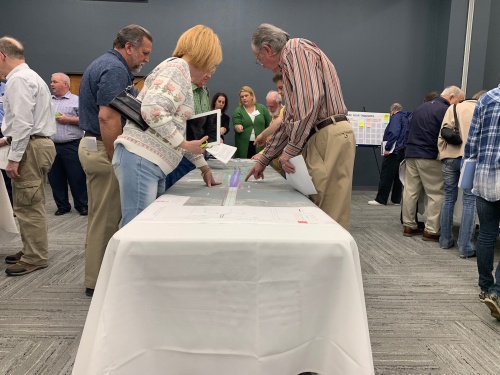 Residents attend a March 7 workshop to provide feedback on proposed improvements to Loop 360 at RM 2222 and Courtyard Drive.

The Texas Department of Transportation is soliciting resident feedback on proposed improvements to Loop 360 as part of $250 million plan to improve intersections along the thoroughfare and relieve congestion.

The state agency hosted a well-attended workshop—more than 100 residents attended—on March 7 at the Riverbend Church in West Austin. Residents can also submit public comments through March 22 at www.loop360project.com.

The proposed changes include reconfiguring Loop 360 at RM 2222 to a diverging diamond interchange at the intersection and replacing the existing traffic signal at Courtyard Drive with an underpass.

TxDOT is considering two options, which it presented to residents and received feedback on at the March 7 workshop.

In the first option, drivers would take the southbound braided exit ramp located just south of RM 2222 to a connector road allowing a right or left turn directly onto Courtyard Drive.

In the second option, drivers would take the southbound exit ramp located north of RM 2222 and used the proposed intersection bypass lane to access the connector road allowing a right or left turn directly onto Courtyard Drive.

The scope of the project also includes a shared-use path and sidewalks within the project limits to improve bicycle and pedestrian accommodations.

The agency is currently working on the preliminary design and environmental phases of the project. The project will then enter its final design phase, expected to last a year, and then proceed to construction, which is planned to begin in 2023.

“If all goes swimmingly,” Wheelis said, construction will finish in two years.

Other intersections that will be affected by the Loop 360 program include Westlake Drive, Spicewood Springs Road, Lakewood Drive, Walsh Tarlton Lane, Lost Creek Boulevard and Westbank Drive, and RM 2244.

TxDOT has already hosted meetings at Westlake Drive and Spicewood Springs Road and plans to host a second meeting for improvements at Westlake in the coming months.

Resident feedback on proposed improvements at Westlake have led TxDOT to opt for an underpass rather than an overpass, said Lucas Short, program manager for the Loop 360 project.

“The overwhelming support from the community was for the underpass,” Short said.

Feedback on the proposed changes at Westlake Drive have led TxDOT to opt for an underpass rather than an overpass.

The agency also conducted a survey in November in which residents said their top three priorities are intersection improvements, access on the highway, and pedestrian and bicycle facilities.