Flood operations increase again at dams along the Colorado River 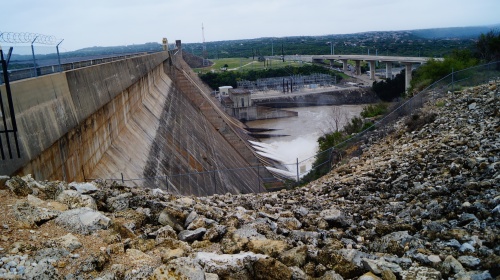 A second floodgate will be opened at Mansfield Dam begining May 11.

The Lower Colorado River Authority will increase flood operations along the Colorado River beginning at 3 p.m. due to rain upstream of Austin, according to a May 11 news release.

LCRA said a second floodgate will be opened at Mansfield Dam at Lake Travis this evening, while the two partially open gates at the Tom Miller Dam in Westlake will be fully opened.

The partially open floodgate at Buchanan Dam will be fully open at 3 p.m. Floodgates at Wirts and Starcke Dams will be partially open as well, at 6 p.m. and 7 p.m., respectively, according to the release.

Due to floodgate operations, the Austin Fire Department on May 10 issued a waterway ban for Ladybird Lake from Red Bud Trail to Tom Miller Dam and for Lake Austin from Oyster Landing to Tom Miller Dam through noon on May 15, according to the official announcement.

The dayslong flash flood watch for Central Texas that included Travis, Hays, Williamson and Comal counties was lifted by the National Weather Service on May 11 at 2:12 p.m., two hours earlier than scheduled.