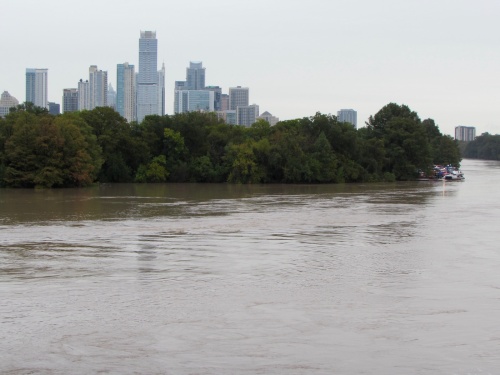 Recent rain has caused flooding in areas of Austin.

The Barton Creek Greenbelt has been reopened for now, according to a May 6 news release by the Austin Parks and Recreation Department. With rain in the forecast later this week, the department stated future closers could be put in place, and that slick conditions persist on the trail. Barton Springs Pool remains closed.

According to a news release by the city of Austin, the Ann & Roy Butler Hike and Bike Trail "experienced varying degrees of erosion" due to flooding and the trail is partially reopened, although sections continue to be closed off. The Barton Creek Greenbelt remains closed due to "trail erosion and swift creek currents," the release states. Barton Springs Pool also remains closed as of 9 p.m. May 4.

The Austin Fire Department has placed a waterways ban for Lake Austin, Lady Bird Lake and the Colorado River downstream of Longhorn Dam effective until noon on May 6. The waterway status will be reevaluated at that time, according to the fire department.

Flood waters are still flowing through Barton Springs Pool (video at 8:00a on May 4). Be safe Austin and stay away from flooded creeks. #atxfloods #bartonsprings #bartonspringspool #austin #parks #austintx #zilker #zilkerpark pic.twitter.com/LW2N5TSwU5

As of 9 p.m., ATX Floods reported that 154 low water crossings are still closed across Central Texas, a decrease from the night prior.

According to a city of Austin news release, the Barton Creek Greenbelt, the Ann & Roy Butler Hike and Bike Trial and Barton Springs Pool are closed due to flooding. Barton Spring Pool will remain closed until pool clean-up is complete and the parks department will provide updates on the closures as conditions change, the release states.

There were 219 reported road closures at low water crossing in Central Texas as of 1:21 a.m. on May 4, according to ATX Floods. Recent additions to the closure list in West Travis County include low water crossings on River Hills Road in the Westlake area and Hamilton Pool Road at the Pedernales River.

The National Weather Service has extended the flash flood warning for Travis County and North Hays County until May 4 at 2:30 a.m.

Original post May 3, 9:57 p.m.:
According to ATXfloods, there were 147 road closures in the Central Texas area as of 9:57 p.m. May 3 related to heavy rains throughout the day in the area. In Travis County the majority of road closures have occurred in the south and east.

A flash flood warning is in effect for Hays and Travis Counties until 11:30 p.m., according to the National Weather Service.The following low water crossings were closed in Austin as of 9:57 p.m. A full map of low water crossings in Central Texas can be found here:


Other closures and flood conditions have been reported by local officials.

Numerous low water crossings are closed across Austin and the region. See the current status of all crossings at https://t.co/qKRtK9sfqA. Remember: Turn Around - Don't Drown. pic.twitter.com/iNGzpgLfZ4

Westbound SH 71 has reopened near US 183. #atxtraffic

? Hey #ATX! If you don’t need to be on the roads right now then stay off them. Roads flood quickly! Remember if barricades are up for a reason, DO NOT ignore them. Check https://t.co/Octz8HRGQG for flooded road information. ? #TurnAroundDontDrown #Atxw

Rapid rises are being observed on Williamson Creek at Oak Hill in Travis County. The stage is close to 11 feet (as of 8 PM), which results in impacts of most of a large shopping mall along Highway 290 in Oak Hill is flooded. Latest observations: https://t.co/SNRDeca7nu pic.twitter.com/EHrGd2sny2