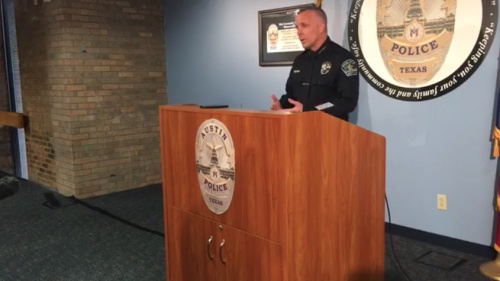 Austin Police Department Chief Brian Manley speaks in response to an audit of his department's handling of rape cases.

The Austin Police Department incorrectly cleared or misclassified a significant portion of rape cases, according to a Jan. 11 audit report by the Texas Department of Public Safety.

At a Jan. 16 press conference about the report’s findings, APD Chief Brian Manley said the audit revealed issues with the department’s coding process, not its investigations.

“Everyone is committed to doing the best we can by our community, employing best practices and that is why we welcome this outside review,” Manley said.

Auditors selected and reviewed 95 rape offenses that were exceptionally cleared by APD in January, November and December of 2017.

Exceptional clearance is a mechanism by which law enforcement agencies can close an investigation without making an arrest.

To do so, the agency must know the the offender’s identity and location; have enough information to support an arrest, charge and case against him or her; and be unable to do so because of some reason outside law enforcement control, such as a survivor who stops participating in an investigation or a prosecutor who declines the case, according to the Universal Crime Reporting Handbook, which is published by the Federal Bureau of Investigation.

Auditors found that only 29 of the 95 cases exceptionally cleared met the appropriate guidelines.

Thirty of the APD cases the auditors reviewed did not meet the guidelines for exceptional clearance. The remaining 36 cases were either misclassified, such that they should have been listed under a different crime or did not meet the definition of rape; unfounded claims; or cleared at the incorrect time, per UCR rules.

"While we're glad this audit has been completed, it confirms that we have serious issues and we need to take quick action that corrects the patterns that allowed these cases to be handled improperly," said Austin Mayor Steve Adler and Mayor Pro Tem Delia Garza in a written joint statement.

In response to this audit, APD has trained some of its supervisors and detectives in the UCR coding process and has assigned them to review the report’s findings, a task Manley said he expects will be completed later this week.

Additionally, Manley said the department has implemented policy changes—including introducing a new template that officers will be required to fill out when designating a case exceptionally cleared to ensure it meets all of the UCR requirements—and will request a third-party independent review of how it handles sexual assault cases, “from the 9-1-1 call ... all the way through the investigation.”

Based on its findings, DPS has required APD to review its internal policies and processes to make sure it meets UCR guidelines; a written response, detailing its plans to address the deficiencies found in the report, is due to the state agency by Feb. 22.

Manley said this response will be disclosed publicly.

The audit was prompted by a Nov. 15 article published by the investigative reporting website Reveal that found APD has classified as many as two-thirds of sexual assault cases “closed” when no arrest has been made.

That same day, half a dozen citizens spoke at an Austin City Council meeting about the article. Some, including Rebecca Bernhardt, a policy coordinator at the Austin-based Texas Association Against Sexual Assault, requested an independent review of APD’s sexual assault clearance process.

In response, APD Chief Brian Manley told Community Impact Newspaper on Nov. 28 that he had requested an audit by DPS.

"Although we have had issues along the way ... we have [been] shown to be a department that takes these challenges head-on," Manley said at the press conference. "We want to give the best possible service to people who have survive some of the most horrific crimes."