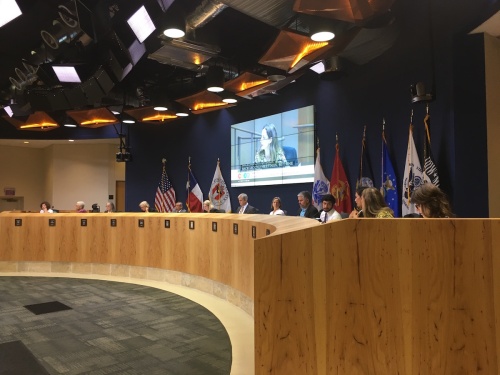 Austin Energy will push to have 65 percent of its energy come from renewable sources by 2027 following Austin City Council’s adoption of the city’s energy generation plan on Thursday.

The 10-1 vote—District 8 Council Member Ellen Troxclair was the lone objector—comes on the heels of an electric utility task force recommendation that suggested the city boost its renewable energy goal up from the current 55 percent renewable energy by 2025 plan. Last week, hundreds of people testified in favor of a more aggressive goal of 100 percent by 2030. According to some city staff members, the near 300 people who signed up to speak made last week one of the largest Austin City Council public hearings in recent memory. District 7 Council Member Leslie Pool supported a recommendation to move toward 65 percent renewable energy by 2027 but pushed Austin Energy to create models that would show what 75 and 80 percent by 2027 and 100 percent by 2030 would look like.[/caption]

Although the city adopted the 65 percent goal, District 7 Council Member Leslie Pool amended the resolution that also created parallel aspirational goals. Austin Energy is tasked with creating models that show what achieving 75 and 80 percent renewable energy by 2027, and 100 percent by 2030, would look like, considering the “costs, benefits, risks and potential rate impacts."

Pool acknowledged Thursday’s adopted goal was “not everything we wanted.”

“But I’ve accepted the realities of where we are now, as things stand now—that this is the best way to move us forward,” Pool said.

Mayor Steve Adler said he was “incredibly proud” of the city’s response to climate change.

“We have a lot to celebrate here,” Adler said. “With this, we remain the international beacon that this city is.”